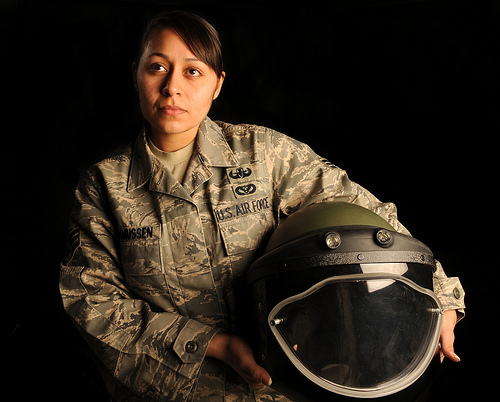 Sexual assault in the military has reached near epidemic proportions, as Rep. Niki Tsonga (D-MA) reported at a meeting of the House Armed Services Committee in February:

In 2010, there were 3,230 reported sexual assaults in the military. But by the Pentagon’s own estimate, as few as 10 percent of sexual assaults are reported. The VA estimates that 1 in 3 women veterans report experiencing some form of military sexual trauma.

Some put the number even higher; Corps Captain Anu Bhagwati, executive director of the Service Women’s Action Network (SWAN), estimates that “19,000 servicemembers were sexually assaulted just last year.” In her award-winning Ms. magazine article, Helen Benedict revealed that “the rate of sexual assault and rape in the military is at least twice as high as it is among civilians.”

There have been efforts to prevent military sexual assault in the past, but for the most part they’ve been unsuccessful. In 2005, the U.S. military formed a task force on sexual assault to develop prevention strategies and tracking data, but three years and $15 million later, the Government Accountability Office determined that they hadn’t accomplished anything of substance and reports of sexual assault have risen.

The most sobering statistic: “Female recruits are now far more likely to be raped by a fellow soldier than killed in combat.” Recently 17 veteran and active-duty service members who were raped, sexually assaulted or harassed while serving their country have filed a class-action lawsuit against former Defense Secretary Donald Rumsfeld and current Secretary of Defense Robert Gates for failing to prevent, investigate and prosecute the crimes.

In May 2010, Reps. Tsongas and Mike Turner (R-OH) introduced the The Defense Sexual Trauma Response, Oversight and Good Governance Act (The Defense STRONG Act) in Congress. The last action taken on the bipartisan bill was its referral to the subcommittee on military personnel, but it will no longer languish there: Today Reps. Tsongas and Turner have announced that they will reintroduce it. Rep. Turner explains:

Tragically it was the story of Lance Corporal Maria Lauterbach who brought [the issue of military sexual assault] to my attention. She grew up in Dayton, OH and enlisted in the Marine Corps. Maria was honorably serving her country when she was sexually assaulted by a senior enlisted member in her unit. She then was forced to serve with her assailant for the following eight months before he attacked and killed her and her unborn child and buried them in his backyard. This tragedy did not have to occur, and sadly we have seen time and again that it is all too common. The terrible lesson of Maria’s story is what has helped to shape this legislation … None of our brave men and women in uniform should ever have happen to them what happened to Lance Corporal Maria Lauterbach. This legislation will begin to put in place protections and rights that were never afforded to Maria.

The Defense STRONG Act will expand legal rights and protections for service members who have been the victims of sexual assault by:

SWAN has announced its support of the bill, but some still see problems with not just the way military sexual assault is treated, but the entire military culture. Panayiota Bertzikis, a former Coast Guard member who was raped by a shipmate and is now executive director of the Military Rape Crisis Center in Somerville, Mass. says,

The problem of rape in the military is not only service members getting raped, but it’s the entire way that the military as a whole is dealing with it. The entire culture needs to be changed.