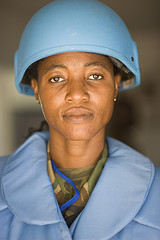 As conflict rages in various regions of Africa, Ghana has just won dual accolades from the United Nations: for its transparent, democratic elections and, of note to feminists, for its inclusion of women in peacekeeping missions. Ghana has 55 women on the front lines of the 700-person contingent of peacekeepers it has sent to Liberia maintain a stable, peaceful environment and create an arena of positive economic development. It has also sent hundreds of women peacekeepers to key areas such as Darfur and the Congo, making Ghana the second highest contributor of female peacekeepers in the world, after India.

Women peacekeepers are seen as a potential solution to one of the most critical feminist issues in contemporary Africa: systematic sexual violence in areas of conflict. Rape is so common a weapon in the Democratic Republic of Congo’s ongoing civil war that the country has earned the title of “the worst place in the world to be a woman.” Making matters worse, the primarily male United Nations peacekeeping forces there have reportedly sexually assaulted Congolese women.

Female security forces offer hope on many fronts. Victims are more likely to report sexual violence to women in authority than men. Women peacekeepers are particularly vigilant about gender-based violence, even training local women in self-defense and community policing. And the symbolic presence of women in positions of authority can be empowering. For instance, after India deployed the first all-female UN police unit to Liberia, in 2007, sexual violence reporting increased and many more women joined the Liberian national police force. The unit set up health initiatives and skills training for women and girls, including child and maternal care.

The new United Nations agency UN Women has begun a concentrated effort to increase the number of women in security forces. The Executive Director of UN Women, Under-Secretary-General Michelle Bachelet, calls increasing women peacekeepers “a critical security measure.” T he UN Police Division has said it wants to take its military personnel from 3 percent women to 20 percent women by 2014.

UN Women’s call has been joined by local groups such as the newly formed Nigerian women’s group Women without Walls Initiative, which has spoken out for more women soldiers to protect citizens in the ongoing conflict in Jos.

A focused increase of women in African missions could have tremendous implications. Ghana’s contribution of women peacekeepers to Liberia, Sierra Leone, and the Democratic Republic of Congo is a good start, but there is still a long way to go for the UN to reach its goal of a 20 percent female police force by 2014. As new missions are needed in Africa–for instance, in southern Sudan during its transition to independence this summer–other countries must step up to the plate.