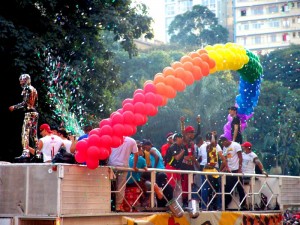 Brazil’s Federal Supreme Court announced yesterday that it had voted unanimously to recognize the legal rights of same-sex partners in civil unions. While the Brazilian constitution defines a “family entity” as a “stable union between a man and a woman,” Attorney General Roberto Gurgel argued that the clause is a definition, not a limitation. It does not state that a stable union can “only” be between a man and a woman.

He went on further:

When the state refuses to recognize a homosexual (civil) union, it is sacrificing rights that parties to that union have.

The ten justices who voted on the case–there was one abstention–agreed wholeheartedly. Justice Ricardo Lewandowski said, “No one should be deprived of rights on the basis of sexual orientation.” Not surprisingly, the local Roman Catholic church disagreed. “Plurality has its limits,” lawyer Hugo Jose de Oliveira told the court, representing the Brazilian National Bishops Conference.

While this is one legal step short of marriage equality in Brazil, the rights of a “stable union” are virtually the same as those of a marriage, including retirement benefits, inheritance rights, health-insurance benefits and adoption rights. Said Maria Berenice Dias, a Brazilian judge specializing in gay rights,

Lacking a law approved in Congress regulating gay civil unions and homosexual marriage, the recognition by the Supremes is the best thing that could happen.

Brazil is home to an estimated 60,000 gay couples, according to the country’s 2010 census. Most of its major cities have a vibrant gay community, and Sao Paolo hosts what is considered the largest gay pride parade in the world, attracting more than three million people each year.

That parade hides a darker reality for Brazil’s gay population, though. Brazil ranks number one when it comes to assassination, discrimination and violence against homosexuals. In 2009, 198 people were murdered because they were gay, the most in the world. Mexico ranks second with 35 deaths, the U.S. third with 25. According to the Grupo Gay de Bahia, the oldest gay advocacy group in Brazil, more than 90 percent of those murders went unpunished.

The degree of civilization of a country can be measured by the way people treat their homosexual community. It’s a historic day for Brazil.

Brazil is now the largest Latin American country to recognize same-sex unions. In 2007, Uruguay was the first in the region to legalize civil unions for same-sex couples, and in 2010 Argentina legalized same-sex marriage. In August, Mexico’s Supreme Court upheld a 2009 Mexico City law that permitted same-sex marriage, and in Colombia same-sex couples enjoy pension, social security and property rights.

Photo from the 2005 gay pride parade in Sao Paolo from Wikimedia Commons.