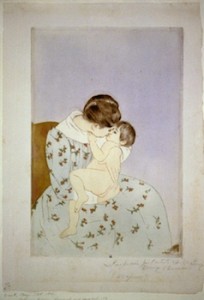 I did not expect that being a mother would make me more of a feminist. In fact, I feared quite the opposite, worrying that my feminist convictions would wane under the weight of overfilled diaper bags and the expansive responsibilities of caring for an infant.

When I had my first child, a son, just after finishing my Master’s and while ramping up to begin my Ph.D, I worried that motherhood might de-radicalize my politics and cause me to lose my feminist vision of the world.

During that first pregnancy, I had applied for various doctoral programs and been happily accepted to the University of London–an acceptance that necessitated my partner and I move from the U.S. to England during my 34th week. While my mother, grandmothers and older sisters were convinced I would give up the doctorate once I fell madly in love with motherhood, I firmly disagreed with their image of me as stay-at-home mom basking in the glow emitted from Teletubbies while pureeing homemade baby food. But would I lose my love of reading obtuse theoretical treatises and instead dog-ear Dr. Spock and What to Expect When You Are Expecting? Would I decide that a career in academia paled in comparison to “a woman’s true vocation” of being a mother?

These fears and many more fizzled through my increasingly exhausted brain throughout my pregnancy and practically boiled over when I discovered I was having a boy–a discovery I had dreaded. I wanted a daughter–a girl that would grow into a woman with whom I could fight the feminist good fight, a girl whom I could give the feminist upbringing I never had, a girl who I could let know from Day One was as strong, smart and capable as any penis-privileged human. Looking back, this dread of having a son embarrasses me. I see now that it is just as important to raise feminist sons as it is to raise feminist daughters.

I love men (some more than others), but I have to admit, like many feminists, that there are aspects of masculinity I see as harmful, useless and/or idiotic. If push came to shove, I would probably commit a grave sin of gender essentialism and say that women tend to be more socially aware, more just and more prone to activism than men. (However, I hasten to add I believe this is the case not because of female biology or hormones, but because of the ways women tend to be socialized as women.) As a card-carrying member of the ‘gender is socially constructed club,’ I thus believed I could raise my son to love justice more than football, peace more than toy guns and hot pink more than camouflage.

So imagine my shock when my son was born and what my mother had so long insisted proved to be true–he actually seemed to be “boy-like” by nature! At playgroup gatherings, he was little Rambo on the rampage, grabbing toys from others and then whacking them over the head with them. At parks, he acted like a colonizer intent on committing genocide on any kid who dared to play on his turf. At home, despite the fact that I refused to buy weapon toys, he industriously built toy guns from Lego, play dough and Lincoln Logs to shoot everything (including me). For a while, I sadly gave into my mother’s mantra that “boys and girls are just different” and chalked up my faith in social constructionism to naiveté.

However, as the years wore on, I realized I had fallen prey to the binary thinking mode I am so critical of in my academic life–I had seen my son’s strong affinity for traditional masculinity as proof that social constructionists had it wrong. How could I, a feminist schooled in post-structuralism, postmodernism and political theory, be such a dupe?

My personal feminist theoretical crisis concerning gender essentialism versus social constructionism was not resolved by the birth of my daughter two-and-a-half years later. For just as my son seemed to be a “natural boy” so did my daughter exude femininity from birth onwards. These children were ruining my long-held feminist beliefs! They were proving my mother right! And, as I tried to balance raising them alongside finishing my dissertation, I found myself living a double life–feminist by day, mother by night. While I continued to read and write feminist literary theory, my practice of being keenly politically informed and active waned.

In my children’s early years, I did not attend any protests or participate in any girlcotts, let alone stay abreast of activist news and happenings. My feminism became abstract–rather than living ‘the personal is political’ I seemed to be opting for “feminism is philosophical,” directing my feminism solely into research and writing. Although I practiced the basic tenets of feminism and endeavored to raise my children to value diversity, equality and social justice, I became, in the main, an academic feminist rather than an everyday feminist activist.

However, as my children grew and entered institutional education, and as a number of world events changed the socio-cultural landscape, I returned to my pre-children self of fighting the feminist fight not only in my writing and teaching, but also via my battles with teachers, principles, corporations and even roller-rink managers.

Further, as my children moved from babyhood to toddlerhood to childhood, I saw to my relief that they were not the “typical boy” and “typical girl” they had first seemed. My son revealed a feminine side, a true love of the color pink, an aptitude for tap dancing and a very strong nurturing personality. My daughter revealed she did not only love dolls, fashion and burying her head in books, but also math, wrestling and skateboards. I think I can take at least some credit (along with my partner) for our children’s gender-blending personalities. My insisting that my children use gender-inclusive language, arguing for Tinky Winky’s right to carry a purse if he wished or analyzing the injustices of Nicktoons boy-dominated cartoon lineup helped to turn out two socially aware, feminist kids.

And while I worried I had lost my activist streak, I see that instead I had fostered too narrow a vision of what feminist activism is. Raising children to be pro-peace, consumer-conscious and actively anti-sexist/racist/classist/heterosexist/able-ist can be just as vital as marching on Washington.

In hindsight, I am bemused that I ever imagined otherwise. I, who had read Adrienne Rich’s Of Women Born multiple times, had theoretically understood “motherhood as institution,” had failed to see how our patriarchal, non-feminist-friendly society had warped my own conceptions of mothering and made me second-guess my own abilities to be both a feminist and a mother. I know this is in part due to the way that mothers are still a fairly denigrated bunch in the public world and also in the academic world in which I labor. Work is supposed to come first, and whether that work is feminist or not, being a mother is often seen as a hindrance.

As books such as Impeccable Advice for Women in Academia suggest, if one has children it is better kept a secret. My office mate of two years was shocked to learn I had two children. The sad thing is that I took this partly as a compliment, knowing I had done what Ms. Mentor (author of the above-mentioned book) advises for academic survival. Yet I began to feel angry that I had to hide, or at the very least not discuss, the mother part of my identity. How would my kids feel if they knew they were a dirty secret I had to keep from colleagues?