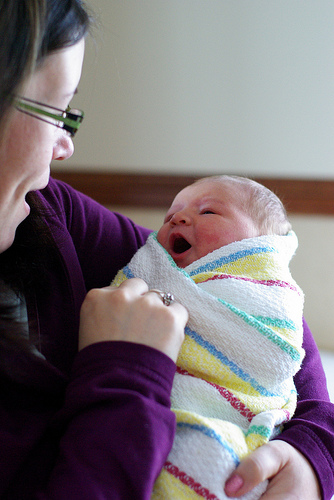 On Mother’s Day, it’s easy to get caught up in the Hallmark image of Mom. Even in the 21st century, the idealized mother often appears as straight, married and, if not stately or stodgy, at least mature in years.

But how many mothers actually fit that stereotype?

In particular, we want to give love to those Mamas who are immigrants, single, young, queer or low-income. We know these Mamas are often at the core of our families and communities, but are often overlooked or worse—they are scapegoated by policy-makers and right-wing conservatives.

As part of that celebration, a variety of women’s organizations nationwide have been holding events all week: On May 5th in New Mexico, for example, Young Women United, a “fierce group of revolutionary women” that supports and empowers young women of color, Tewa Women United, an inter-tribal, inter-generational group of Native women and Española Valley Women’s Health participated in a three-mile walk in solidarity with midwives worldwide.

As Tewa Women United’s Kathy Sanchez explained to me, one of the ways the scientists and government bureaucrats in New Mexico have most affected women was by, during the 1950s, discouraging home birthing practices and advising women to deliver in the Indian Hospital. “Here, we were forced out of it, we were shamed out of it,” Sanchez said.

But about three years ago,  Tewa Women United began partnering with Mexican groups through the Tewa Birthing Project, which educates Native mothers to embrace home birthing and encourages young women to study midwifery, then practice their skills at home in northern New Mexico.

Here’s where you can share your own Strong Families stories and let the world know why you love your Mamas.