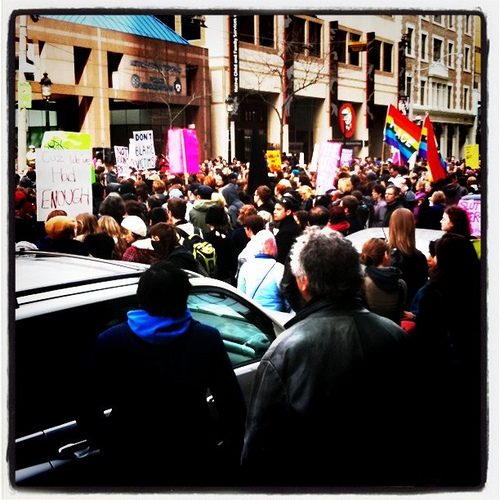 “Thanks, white dude, for your insightful commentary on black women and abortion.” Kaitlyn at the Abortion Gang takes on the Chicago Tribune.

The Nation reports on an unorthodox offer a U.S. non-profit is making to Kenyan women living with HIV: Join a cohort of 10-15 other HIV-positive women, come up with a viable small business plan, receive an intrauterine device (IUD) to serve as long-term birth control and in return, you will be paid $40. Needless to say, this is a controversial plan. Anna Clark expounds on the many issues it brings up.

This week, the DC Trans Coalition released a list of priorities for achieving trans equality in D.C. So what do trans people want? Amanda Hess has the full list at TBD.

From Jezebel: One third of clothing for girls is “sexy.”

Finally, Kate Swift, a crusader for non-sexist language who wrote for the inaugural issue of Ms., died this week at 87. The New York Times reports on her life and death.

Above: SlutWalk Toronto, courtesy of Flickr user troismarteaux under CC 2.0