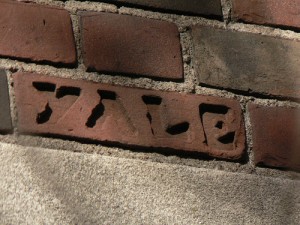 But have the fraternity brothers really learned their lesson?

We’ve corrected the situation. … We suspended their pledging activities for six weeks so we could review their activities with them. Clearly the chanting was inappropriate and in poor taste, but does it warrant a five-year suspension?

Yes, it does. Cheering for rape doesn’t really create the safest campus environment. And this isn’t the first incident in recent years of Yale frat men showing their insensitivity and disrespect for women students:

This time, the university had harsh words for the offenders. Dr. Mary Miller, dean of Yale College (the undergraduate program), wrote a letter to students and faculty saying,

After a full hearing, the committee found that the DKE chapter, as an organization, one comprised of Yale students, had threatened and intimidated others, in violation of the Undergraduate Regulations of Yale College as they pertain to ‘harassment, coercion or intimidation’ and ‘imperiling the integrity and values of the university community.’

Dr. Miller asked the international DKE organization to also suspend the chapter for five years. That punishment is unlikely, however, because the fraternity believes the university’s punishment was excessive and has only put the chapter under probation. Using a curious choice of words (“impotent”?), this is how DKE defends itself:

While the events were insulting, in poor taste and amounted to a rather impotent and puerile show, ΔKE firmly disputes this to be a legally actionable case of sexual harassment.

Yale’s action against the fraternity came several weeks after the college revealed it was under investigation for a possible Title IX sex discrimination violation. A complaint by 16 students and alumnae to the U.S. Department of Education Office for Civil Rights accused the school of permitting a hostile sexual environment to exist on campus.

Photo by Flickr user Marc_Smith under license from Creative Commons 2.0

Sign here to petition DKE to suspend its Yale chapter.