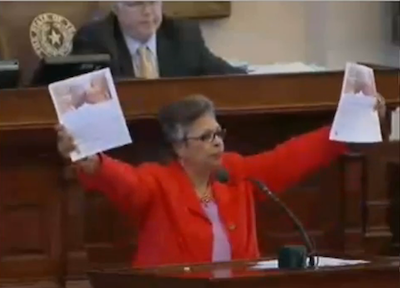 We haven’t had much reason to “heart” Texas in the last several months. Its Senate is trying to defund Planned Parenthood, and its governor just signed a bill requiring that women seeking abortions must undergo an ultrasound and listen to a detailed description of the size of their fetus’ limbs and organs. But we applaud the Texas women legislators who stood up on Thursday and said they wouldn’t tolerate sexism on the floor of the House anymore.

The women legislators contend that this sexism is not limited to anti-woman bills but is also prevalent in the law-making atmosphere. Democratic State Rep. Senfronia Thompson cited a House Republicans flier protesting an insurance bill she’d proposed. The flier depicted a breastfeeding baby and read, “Don’t expand the nanny state.”

Taking a passionate stand before the House, Thompson said that legislators have an opportunity to shape public attitudes towards women and are abusing this privilege by putting women down.

I find these fliers despicable. I find them distasteful, I find them hateful and I find that they foster disrespect and violence towards women–and I am appalled today that this Texas civil justice league would go so low that they would put out this kind of hate–resentful, bitter, despicable, violent fliers–toward women just to get at a piece of legislation.

Following Rep. Thompson’s speech, Democratic Rep. Carol Alvarado came forth with a bipartisan group of women to join Thompson in denouncing the “attack on women.” She said:

This piece of propaganda is a below-the-belt political tactic. We have had almost 50-plus amendments and/or bills that have come across the floor this session that I think have demeaned women—but this one [referring to the flier] takes us to an all-time low.

After hearing what her colleagues had to say, Thompson became so impassioned that she broke her bracelet slamming her fist down on the podium. Sh e concluded:

I don’t appreciate this attack on women. I don’t appreciate this flier. And I’m going to have to tell you something: I don’t perpetrate violence against somebody, but if they were here I would probably bloody their nose. Because they have no right to do women this way, and we have not earned this disrespect in this house. … And men—if you don’t stand up for us today…don’t you walk in this chamber tomorrow.