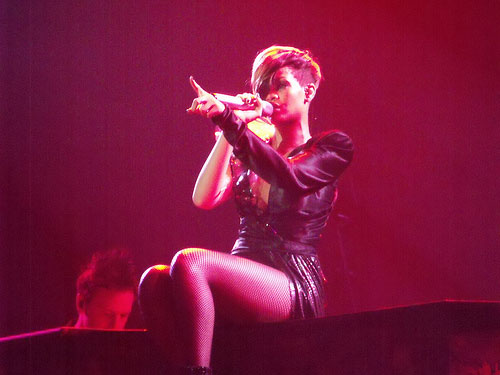 Rihanna has a genius for controversy.  As soon as the music video for her latest single, “Man Down,” premiered this week on BET’s 106 & Park, it created an instant backlash from various groups demanding it be banned from television. However, the outcry is not about depictions of S&M fantasies or a same-sex kiss or even passive acceptance of domestic violence.  This time, she is being condemned for promoting murder.

I have to wonder if I’ve seen the same video.

I see a revenge story by a rape survivor, who makes it clear that, no matter what a woman wears or how she dances or if she walks alone at night, rape is wrong and deserves punishment. Rihanna reiterated this message when she broadcast on Twitter:

Young girls/women all over the world … we are a lot of things! We’re strong innocent fun flirtatious vulnerable, and sometimes our innocence can cause us to be naïve! We always think it could NEVER be us, but in reality, it can happen to ANY of us! So ladies be careful and #listentoyomama! I love you and I care!

While I understand the moral concerns about popular messages that condone violence, the hue and cry over this video seem to reflect a deeper anxiety. After all, if parental groups worry that pop stars such as Rihanna are encouraging young women to seek violent retribution, then I wish they would also condemn blockbuster action movies, video games and comic books that preach the same message to young boys. Or is it perfectly okay for action figures like Thor or Batman or a regular American G.I. to seek justice through violent means? And what does it mean for the larger public to loudly condemn a fictional scene of a rape victim grabbing her gun and pulling the trigger on her perpetrator, especially when other violent representations in media are not condemned but championed?

Part of the uproar, I imagine, is tied to the unforgettable photo of Rihanna’s bruised and battered face, released publicly in 2009 by TMZ against Rihanna’s will in the wake of her assault by then-boyfriend and singer Chris Brown. Because of this incident, Rihanna has had to wrest back control of the “victim” image foisted on her, and she in turn has challenged us rhetorically and visually to question and examine the power, danger and violence that shape our sexual relations.  We see this in videos such as “Russian Roulette,” “Hard,” “Love the Way You Lie,” “S&M,” and now “Man Down.”

What is especially intriguing about “Man Down” is its throwback sound and imagery to the Jamaican dancehall culture of the 1990s, which coincided with gangsta rap in the U.S.–a time when the music became grittier, sexier and more violent. The hopeful messages of black liberation in hip-hop and reggae in the 1970s and 1980s had given way to the despair and nihilism of the poverty-stricken ghettos and trench towns of the Black Diaspora.  A new “dirty reality”–to quote dancehall artist Lady Saw, to whom Rihanna pays visual homage–took place. Within this climate, the loaded gun (often heard on many of the soundtracks, most notoriously in Buju Banton’s homophobic “Boom Bye Bye“) became omnipresent, and the black woman’s body presented sexuality in its rawest form.

When Barbadian-born Rihanna locates her music video in Jamaica, the birthplace of reggae, she not only returns to her Caribbean musical roots but also appropriates symbols of masculinity to express female rage, enacting the all-too-familiar “battle of the sexes.” Her video’s prologue recreates a Hollywood version of the dark-hooded femme fatale, but as we are invited to understand this mysterious woman’s motives Rihanna performs for us a “yesterday morning” narrative in which a more innocent young island woman is transformed into an outlaw after a chance encounter with a man at a dancehall, who feels he has a right to her body because she danced suggestively with him.

While certain groups may be shocked at the image of yet another black “man down,” shot and left for dead on the streets, what of the tattered and torn rape victim? Yes, she runs for her gun, but the song lyrics suggest that the violence enacted is one of regret, not triumph.

In light of recent events–from Dominique Strauss-Khan’s alleged assault on a hotel room attendant to the acquittal of New York City cops who took advantage of an inebriated woman to Eman al-Obeidi’s reports of rape by Libyan soldiers to Peace Corps volunteers’ stories of rape to Yale fraternity boys chanting “No means Yes!” to the various Slut Walk protests around the world to the countless rape survivors who have yet to come forward–now is not the time to ban and censor this powerful narrative.

Rihanna has pointed a lyrical gun on the issue–one that we don’t have to take too literally, especially since we adults should be more discerning for our youth. Let us respond by triggering useful conversations on the myths and the realities of rape and sexual violence.