Tina Fey and Ellen: Making the F Word and the L Word OK for the Masses - Ms. Magazine
Skip to content 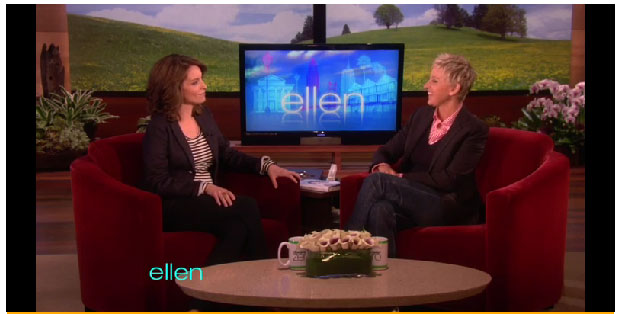 Tina Fey appeared on the Ellen DeGeneres show last week, treating this feminist to an afternoon of giddy happiness–two of my favorite women comedians joking about gender, beauty norms, ageism and the Hollywood machine!

If you wanted to convince the remaining doubters that the F word, lesbianism and same-sex marriage are nothing to be scared of, Tina Fey and Ellen DeGeneres are the perfect vehicles.

In her recent book, Bossypants, (reviewed for Ms. by Audrey Bilger here and for Girl with Pen by yours truly), Fey, like a jocular Mary Poppins, gives readers many spoonfuls of sugar to make the feminist medicine go down. Coating incisive points about sexism with comedy makes them easy to swallow, much like her infamous Sarah Palin impersonations, of which she writes, “You all watched a sketch about feminism and you didn’t even realize it because of all the jokes. It’s like when Jessica Seinfeld puts spinach in kids’ brownies. Suckers!”

While Fey focuses on feminist issues relating to sexism in the workplace and in politics, DeGeneres is more of a comedic lesbian activist. While she has noted she doesn’t wish to be an activist or spokesperson for the LGBTQ community, she often publicly denounces heteronormativity and uses her show as a platform to promote LGBTQ rights. For example, she insisted then-presidential candidate John McCain discuss same-sex marriage when he appeared on her show afternoon television, she denounced Sarah Palin’s support of a federal ban on gay marriage (for which Melissa Silverstein, of Women and Hollywood, named her “Hollywood feminist of the day”) and last year she addressed the issue of anti-gay bullying and LGBTQ suicide. While some argue she is not activist or outspoken enough (as she herself notes), I agree with Kathy Belge’s sentiment that,

Just living her life as an out lesbian, [Ellen] does more with her actions than she could ever say with her words…She talks about being gay when it’s relevant, but she does what she’s best at: making us laugh.

Sure, DeGeneres could take more actions, but couldn’t we all? And, by making us laugh, she sugar-coats lesbianism for a mass audience that might otherwise balk, as when she lambasted the suggestion that same-sex marriage will “turn children gay” on her show with the following:

I don’t know what people are scared of. Maybe they think that their children will be influenced. I gotta say I was raised by two heterosexuals … I was surrounded by heterosexuals—just everywhere I looked, heterosexuals—and they did not influence…I mean I dabbled in high school, who didn’t? Everyone dabbled, ya know?

That joke came to mind when, during this week’s show, DeGeneres asked the pregnant Fey if she knows the sex of her womb-dweller, to which Fey answered:

No, we’ve decided we’re gonna wait. We’re just gonna find out never. Not even after its born. We’re gonna see what it chooses to wear to prom.

Both women, in their typically understated fashion, mock a world in which what is (presumed) to be between one’s legs defines one’s opportunities and treatment in life.

During their banter, Fey and Ellen alluded to lots of big feminist ideas–the institution of motherhood, the hyper-vigilance expected of the female body, gender and sexuality norms, and the mainstream media’s sexualization of women. DeGeneres asked Fey about the embarrassing mother-daughter bra fitting story she relates in her book, and Fey jokes, “This early breast-related humiliation prevented me from ever needing to participate in ‘Girls Gone Wild’ in my twenties.” DeGeneres also talked with Fey about her experiences as a mother; Fey shared that her daughter likes “to play C-section” and pretend she is cutting open Fey’s tummy. As in her book, Fey mocked our cultural obsessions with youth and beauty, joking about being referred to by the medical establishment as of “advanced maternal age.” Discussing magazine cover shoots, she poked fun at the body ideals promoted in the media and revealed all the effort and artifice that goes into celebrification.

DeGeneres wrapped up Fey’s appearance with the following “Don’t you just love Tina Fey?…I will tell you what I like about her: She is funny and smart and she is just a wonderful person.”

I say the same is true of Ellen. And I would add another F word besides funny to refer to them both: feminist.

While many no doubt wish these two women were more overtly political, it takes all kinds of spokespeople and activists to render feminism and LGBTQ rights palatable to the masses. As the saying goes, “You can catch more flies with honey than with vinegar.” Sure, strong activist “vinegar” is necessary, but sometimes a bit of “honey” makes the medicine go down. As for this feminist, she likes her honey Fey- and-DeGeneres flavored! Heck, they should launch a making-feminism-and-lesbianism-safe-for-the-masses comedy tour.