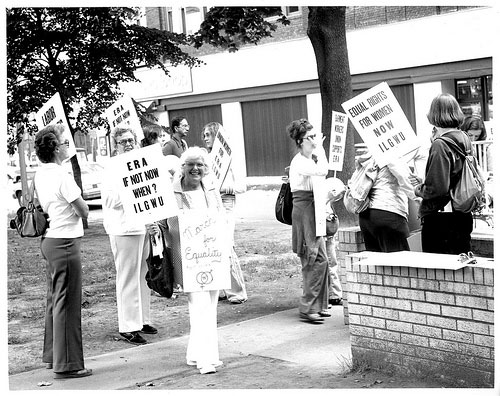 Rep. Carolyn Maloney (D-N.Y.) and Sen. Robert Menendez (D-N.J.) have reintroduced the Equal Rights Amendment (ERA) in Congress. Maloney has been joined, so far, by 159 co-sponsors in the House, with more to come.

Coming just days after the U.S. Supreme Court rejected class-action status for the sex-discrimination case against Wal-Mart, the latest push for the ERA has added resonance. Said Maloney,

The Wal-Mart [decision] … is a classic example of how far attitudes must still come. The facts of the case support the view that over a million women were systematically denied equal pay by the nation’s largest employer.

In the past year, Supreme Court Justice Antonin Scalia (who wrote the majority opinion in the Wal-Mart case), also declared that the 14th Amendment to the Constitution–which guarantees equal justice under the law for all persons–does not protect women from sex discrimination. The ERA–which reads simply “Equality of rights under the law shall not be denied or abridged by the United States or by any state on account of sex”–would make Constitutional protections against sex-discrimination undeniable.

Women’s groups now intend to “score” legislators based on their support for the ERA. Said Feminist Majority Foundation president Eleanor Smeal at a press conference announcing the bill’s re-introduction,

First proposed as the “Lucretia Mott Amendment” way back in 1923, the ERA, originally written by Alice Paul, was finally approved by the U.S. Congress in 1972. But it had to be ratified by 38 states and only managed 35 before it passed the required seven-year deadline. Separate ERAs have been adapted by 21 states in their constitutions.

The amendment has been reintroduced in every session of Congress since 1982, but only received a floor vote in 1983.

Smithsonian American Women’s History Museum Will Give Women Their Rightful Place in History and in D.C.