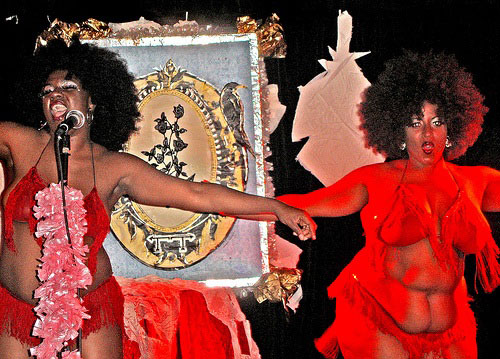 In my Ms. review of Burlesque, the musical film starring Christina Aguilera and Cher, I argued that it contained certain pro-feminist and queer qualities. At the same time, the thin legs, arms and waists of its stars are quite dissimilar from the curvy bodies of most burlesque performers, both historically and in the contemporary neo-burlesque scene. As Sydney Lewis notes in her recent post on Racialicious, dominant images of burlesque dancers privilege white performers and erase burlesque performers of color. To address these disconnects, I spoke directly with Lewis (AKA Miz Ginger Snapz), a Seattle-based burlesque performer and producer, as well as a Ph.D. student in English at the University of Washington, Seattle, and an instructor at University of Washington, Bothell (where I also teach). Here’s my interview:

Ms.:  How did you get involved in burlesque dancing?

Sydney Lewis: Around 2002, I lived in the San Francisco Bay Area and had heard of burlesque but never seen a show. Some friends of mine, who happened to be sex workers, had a fancy girls’ night out and we all went to a burlesque show. The show was at this club with red walls, and at least in my memory I picture it as smoky, though I’m not sure it actually was. We were all decked out in vintage fineries and drinking martinis and champagne cocktails, and it was this nostalgic fantasy. Then I saw Harlem Shake Burlesque, which is the nation’s first all-black neo-burlesque troupe, and they were beautiful brown women with voluptuous curves who worked the stage like no one else that night. They received a standing ovation. It seems silly, but it never occurred to me that brown women who didn’t look like Bettie Page or Marilyn Monroe, were burlesque stars in the early era. And that brown women in the 21st century were claiming that history of striptease. And something just clicked. In 2004, I moved to Seattle, went to as many shows as I could and took some classes. In Seattle during that time there was a very lively queer burlesque scene that was funny, campy, sexy, political and body-positive, and I wanted to be involved in that scene. I started performing in 2005 under the name Miz Ginger Snapz.

Ms.: You now teach a course entitled “Burlesque and Feminism.”  What is the overall mission, and what sorts of assignments do you give?

SL: The course was inspired by the increasing popularity of burlesque as mainstream entertainment and my vexed relationship to that popularity and the ways it has altered the art form. I love burlesque, and have seen acts which make keen commentary on race, gender, bodies and sexuality. But often, as forms of expression become more commodified, burlesque can be emptied of its political potential. With burlesque, I was seeing it shift from something subversive, which was working to redefine beauty and sexuality from “beauty mag” images, to something that was reconfirming those images. So burlesque became this site full of possibility for the proliferation of body-positive, sex-positive feminism, but the more burlesque entered the mainstream the more this potential seemed to empty. As a burlesque performer and an academic invested in cultural studies, I wanted to “tease” out burlesque in the present moment and explore the viability of contemporary burlesque for promoting feminist ideologies and/or social justice.

In my class I encourage my students to become “critical consumers” of burlesque. In order to (hopefully) achieve this, the class has two trajectories. The first looks at the history of burlesque and interrogates and analyzes neo-burlesque. For this, the students create a burlesque timeline of key events in burlesque history, we watch legendary and contemporary performances and talk about the message that the performer is trying to convey and how that message is being put across. We also read and discuss texts related to feminist theory, sex work, feminist performance art and gender and queer theory.

The second track is the “praxis.” Since so much of the political power of burlesque begins with personal transformation, I think that students need to burlesque performance techniques in order to critically interrogate their position on sexuality and the body. Here, we do performance-related activities and students write brief reflections of their experience. After the at-home tassel twirling activity, some of the guys noted that it was bizarre to make pasties and then to go home and figure out where to put them to try and twirl them. Many of the women got a hoot out of the experience or felt a sense of triumph in making them twirl. We also do striptease-related activities like “take 30 seconds to take off one glove” or “seduce with just your eyes.” We play with drag and performing gender. We [also] practice classic burlesque dance moves: bump, grind, strut, shimmy. All of this is accompanied by a lot of laughter and vulnerability. I tell my students that the one prerequisite is the willingness to play and be vulnerable–I think that’s really the crux of burlesque, playing and being vulnerable. And just to be clear, no one is ever nude.

For the final project, students have the option of either seeing a show and doing a critical review, or doing a burlesque performance. About one third of the class performed, and they were brilliant. There were acts about sexy gamer geeks, gender-bending, the complications of sex and motherhood, beauty standards, mental health issues and one boylesque performer did a wonderful act about straight male stereotypes. It was one of my favorite burlesque shows I’ve ever seen.

U.S. Overturn of Roe Will Embolden Anti-Abortion Movements Abroad
Ms. Muse: Melissa Studdard on the Power of Poetry to Create the World We Want
Weekend Reading on Women’s Representation: ‘We Are Meeting Because We Are Prime Ministers,’ Jacinda Ardern Tells Reporter; Ukrainian Women Are Vital in Fight Against Russia