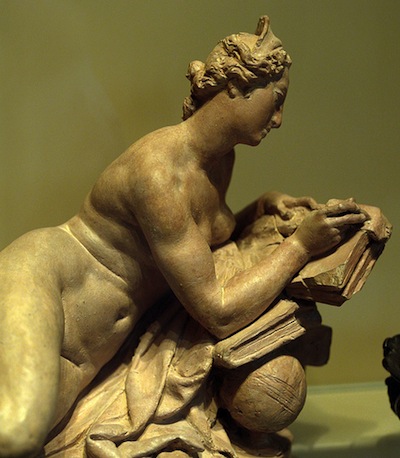 Writer V.S. Naipaul, the Trinidadian-British novelist who won the Nobel Prize for Literature in 2001, recently earned an ignoble prize for sexism because of his demeaning comments about women writers. Aside from his arrogance, Naipaul was described in his authorized biography as being “violent, unstable, a racist and a misogynist,” according to NPR. So it’s no surprise that our blogger has waxed angrily–albeit poetically–about Naipaul and a certain archetype of a male writer. And she wrote this, ironically, while waiting for an exam.

Poem Composed While Waiting for the Gynecologist to Come In. (Seriously.)

Naipaul says he can tell
right away if a writer’s a woman
or a man—the difference
being her narrowness of scope
and excess sentimentality; his
universality and grandness of theme,
his liberty and largesse.
But I’m not at all impressed
by these men I’ve been reading—
with their endless, melancholy verses
about sex with a prostitute
and their appointment of women
as symbols—the woman, a woman,
a woman’s hair, a woman’s voice, a woman’s hand—
oh, it goes on and on. The Platonic Form
of Woman like a magic, literary wand
waved over the page. A woman in bed,
a woman standing on a street corner,
women coming
and going from rooms, talking
(about great men, of course).
All it takes is the mere mention of woman.
And the whole burden
of the man’s psyche—
the whole world-weary, age-old, masterly, genius
of the male psyche—
rises off the page like vapor from a mystic’s bowl,
like the smell of scotch from a scotch glass,
like steam from rain-soaked pavement.
Like swamp gas.
These tedious “universals”
that make particular only the man
and his struggles (poor man! how he struggles!)
with sexual satisfaction,
professional success, power, and recognition. And recognition
of his power and sexual success.
Even in its absence,
the suggestion lingers:
This man is a lover, this man is a man—
perhaps not yet,
but someday to be reckoned with.
“The woman” has seduced him,
or teased him, cheated him, or worse of all sins
ignored him.
Wait! Worse yet, failed to praise him,
to coo, whet, and lick
his potential.
Sorry, am I being sentimental?
Or is the problem now that I’m overly general?
Will I be charged with being coldly rational
and hence insufficiently poetic? I’ll help you
resolve the problem: I’ll give
(women are so giving)
you an image or anecdote
to serve as counterpart and antidote:
I’ve never fucked a prostitute.
Never paid one to stroke my
loneliness, offer herself for my consumption.
Never lain upon the sweaty mattress while she rose
and dressed, my gaze sated, her body
now appearing as appealing
as a half-eaten hotdog on a bun—
just so much flesh gone cold
and smeared with my cum.
Wouldn’t be quick to brag if I had,
or masquerade my bravado with sentiments
that show me to be a forlorn, cigarette-
smoking, iconic writerly desperado.
All this bedding of women
makes what’s universal in men small,
flaccid, and unoriginal. But I digress,
I promised to tell an anecdote, something personal,
something feminine . . .So then,
the guy with the little prick
who fucked me in the ass without seeming to know it. . .?
Will that sort of story do the trick?
Look, a man never played the tease with me,
and plenty I’ve wished would’ve
ignored me, few ever said something sage
after the love (ha!) we’d made. Hell,
I’ve sent my verses about fucking
men to the editors again and again.
And those guys keep rejecting me,
my poem, my gender.
(Or is it the sex?) Now, thanks to Naipaul,
the truth is out: They can tell in a second
my sex by my topic, by my subject.
But I’ve grown to suspect that rather
it’s my perspective
on the very same subject
to which they object.
So here’s the easy rejoinder:
I’m just being reactionary.
This is simpleminded ressentiment.
(Yeah, leave it to Nietzsche
to make all reaction effete,
all women sheep.)
But don’t fail to notice
that saying that is reaction, too,
such an easy ploy: to silence
by making it seem that any response
is whining. (Go ahead, call me shrill.)
This time, guys, I made it easy.
Just read the title,
and you’ll know, like Naipaul,
it’s the second sex
you’re up against.
(Call it literary frottage.)
Then you can forget it.
(Tell me to calm down, while you’re at it.)

Photo of detail from Giambologna’s sculpture “Woman Reclining and Writing (Geometry and Astrology)” by Flickr user takomabibelot, under license from Creative Commons 2.0

Brook J. Sadler, Ph.D., is a poet and professor of philosophy who lives and works in Florida. Her writing can be found in many academic and literary journals, including Philosophy, Journal of Social Philosophy, The Monist, Social Philosophy Today, The Cortland Review, Chariton Review, The Boiler Journal, Tampa Review, ROAR, SWWIM, Atlanta Review and McNeese Review.