Will a Woman Bring Women's Concerns to the IMF? - Ms. Magazine
Skip to content 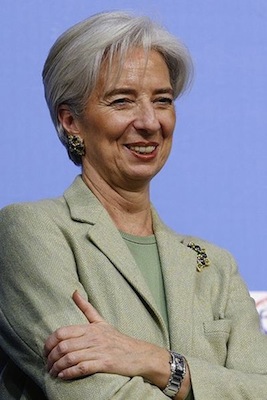 On Tuesday, the International Monetary Fund announced that Christine Lagarde, France’s finance minister, will take over as IMF chief this July–the first woman to do so in the Fund’s 66 year history. Lagarde, who once said her abiding rule for making an impact as a woman is “Never imitate the boys,” will be a welcome change from former chief Dominique Strauss-Kahn, who left the seat vacant after his much-publicized alleged sexual assault of a hotel room attendant.

The new chief is known for her no-nonsense policies and straight talk about economics. She has demonstrated in the past that she is not afraid to root out corruption in the banking system. She was appointed as France’s finance minister just before the economic crisis and has been praised for her ability to  help lead her country through it.

She’s also a woman for women. In a piece by NPR, Edwin Truman, a senior fellow at the Peterson Institute for International Economics, said:

She is an aggressive spokesperson for the advancement of women in everything, and indeed the truth of the matter is [that] in the economic and financial area, women are for a variety of reasons underrepresented.

Lagarde has been breaking glass ceilings throughout her life. She was the first woman to be executive chairman of U.S. law firm Baker & McKenzie (she graduated from NYU’s Stern School of Business), the first woman finance and economy minister of a G7 country, and she beat out Mexico central banker Agustin Carstens, to become the first woman IMF chief.

It’s been made painfully clear to us lately that a woman leader does not necessarily mean a woman’s leader, and while Lagarde supports opportunities for women, she’s been criticized by some for being an essentialist. She once said women make better politicians than men because:

Women inject less libido and less testosterone into the equation … It helps in the sense that we don’t necessarily project our own egos into cutting a deal, making our point across…

[Lagarde] is not above touting about all the ancient stereotypes of femininity, which egregious tropes are what keep women out of high office in the first place. She talks about her “feminine and understated” negotiating style, and how helpful it is.

However, Lagarde has been a great crusader for women’s equality. The policies she set up to encourage business start-ups in France disproportionately benefited women. In 2009 she was ranked by Forbes magazine as the 17th most influential woman in the world, and has used her influence as a platform to advocate hiring more women in business and politics–a principle that would be of great value to the IMF, where women are enormously underrepresented. Women make up only six of the IMF’s 30 senior executives and only 21.5 percent of all managers at the Fund. In May, CNN obtained personal emails between women staffers in the Fund in which they complained about the “male dominated workplace,” where “gender stats speak for themselves.”

An article in The New York Times following Strauss-Kahn’s arrest said that affairs between male supervisors and women subordinates in the IMF are frequent, creating an environment in which women employees are prone to sexual harassment. The Times also cited several incidents in which women’s complaints of harassment were ignored, particularly one in which an administrative assistant claimed her supervisor gave her poor performance reviews when she tried to end her sexual relationship with him–a case the IMF refused to investigate because “the supervisor planned to retire soon.” Before Dominique Strauss-Kahn stepped down, the Times reported, he was well-known for his affairs with many women subordinates—and the Fund allowed it. In 2008, an IMF board decided that Strauss-Kahn had not abused his power in having an affair with a woman employee, despite her claims that she was coerced (she said “I was damned if I did and damned if I didn’t”).

Beyond the violations of women’s rights in the workplace, it has been shown that the IMF’s global policies have more negatively affected women than men. An NYU honors’ thesis about the effect of IMF policies on women points out (PDF):

Adjustment policies ignore women’s productive role in the ‘unrecognized’ economy, activities that include managing the household, reproduction, and raising children, which limit women’s responses to structural adjustment. Thus according to these critics the gender-neutral presentation of IMF policies actually embody a bias against women.

The report claims that the IMF’s policies also have adverse effects on women’s employment and increase the gap between men’s and women’s literacy rates. If Lagarde wants to improve the Fund’s reputation with women, she will not only need to clean up corruption within the fund, but help ensure that its global policies keep women’s economic health and well-being in mind.

Since one of the IMF’s main responsibilities is to dispense emergency funds to countries with serious economic troubles, it has become an important actor during the global financial crisis of the past few years. It also monitors the economies of countries worldwide and gives direction when new financial developments arise. While these may not seem like women’s issues per se, women must be kept in mind when policies are made or they risk being left behind.

There’s no reason Lagarde can’t pay attention to women’s equality while working on the rest of the IMF portfolio during her 5-year term. In the meantime, let’s celebrate yet another glass ceiling broken.

Photo of Lagarde from Wikimedia under Creative Commons 3.0