Abortion and the Slavery Analogy: Dangerous and Wrong - Ms. Magazine
Skip to content 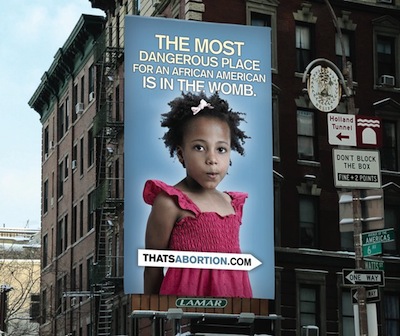 A few months ago in Georgia, dozens of anti-abortion billboards were placed in low-income neighborhoods with messages suggesting abortion is a racist conspiracy to kill or enslave women of color. The billboards, with slogans like “black children are an endangered species,” were paid for by Georgia Right to Life and the Radiance Foundation, a organization dedicated to promoting this conspiracy myth.

These racial arguments may seem like a recent phenomenon, but, from the beginning, the anti-choice movement has drawn on the American legacy of racism and slavery to frame its position.

The modern anti-abortion movement in the U.S. began in the wake of the civil rights movement and its purposeful remembrance of the nation’s odious history of slavery. The 1960s and 70s then witnessed the birth of African American studies as an academic discipline, the inclusion of African American literature in school curricula, and the success of Alex Haley’s Roots. Anti-abortion activists jumped on the zeitgeist bandwagon, comparing abortion to slavery in order to sell their crusade as a moral absolute on which there could be no compromise.

For example, in 1976, journalist William F. Buckley wrote, “One hundred years from now Americans will look back in horror at our abortion clinics, even as we look back now in horror at the slave markets.” That same year, Dr. Jack Willke, founder of the National Right to Life Committee, compared Roe v. Wade to the 1857 decision in Dred Scott v. Sanford in his book Slavery and Abortion: History Repeats. This argument continues to resurface even as recently as January of this year, when Rick Santorum argued on Fox News that Roe denies fetuses “personhood” the same way Dred Scott denied African Americans “personhood.”

The slavery analogy is as dangerous as it is wrong. By equating abortion with slavery, anti-abortionists can argue that the pro-choice rationale (that those who want abortions should be able to get them, and those opposed can abstain) is just as bad as Stephen Douglas’ 1854 doctrine of popular sovereignty, which would allow each new American territory to “choose” its own slavery policy. Christian civil rights activist William Sloane Coffin put it this way: “It’s a cop-out to say that abortion is a sin but not a crime. That’s like saying slavery is a sin but not a crime, that I personally wouldn’t own slaves but I defend the right of others to choose differently.”

The problem here is that the slavery analogy only makes sense if you believe having an abortion is somehow equivalent to owning a human being. (It isn’t.)

Anti-abortion activists continue to use the slavery analogy, though, because they know that in the 21st century almost everyone will agree, in no uncertain terms, that enslaving another is morally wrong. And they believe that fetuses or embryos are “people” deserving legal rights and protections.

The anti-abortion movement uses carefully chosen words like “the unborn” to encourage this way of thinking. It also cites scientific evidence to demonstrate “personhood” in utero. Of course much of it is pseudo-science, or outright lies. For example, a recent wave of anti-abortion legislation was based on claims that a fetus can feel pain at 20 weeks, despite consensus within the medical community that this just isn’t true.

The slavery analogy makes much more sense as an argument for choice, not against it. Slavery is about losing one’s freedom and personal autonomy over one’s body and life. As Margaret Sanger, founder of Planned Parenthood, so eloquently put it: “No woman can call herself free who does not own and control her body. No woman can call herself free until she can choose consciously whether she will or will not be a mother.”

In addition, laws prohibiting or restricting access to abortion treat women as chattel, enslaving them physically by controlling their bodies and ideologically by subjecting them to the tyranny of an imposed morality.

Currently, pregnant women confront increasing threats to their freedom to control their own bodies–especially those in the low-income communities targeted by racialized anti-abortion propaganda. Women in these communities already face countless barriers to accessing regular health care, health education and contraception–barriers that will only multiply as a result of the recent barrage of bills to cut Medicaid and further restrict abortion access throughout the country.

We must turn the anti-abortion movement’s use of the slavery analogy on its head. Let’s remind the world that even though we may never agree about the personhood or rights of the “unborn,” the personhood and rights of living women are indisputable.