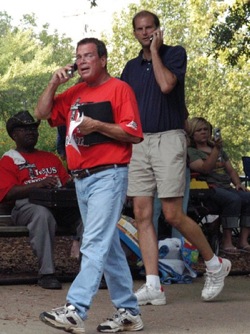 A planned siege of seven Orlando-area abortion clinics by Operation Rescue/Operation Save America (OR/OSA) began this Saturday, but failed to draw the “hundreds” of anti-abortion protesters that organizers had called for. Only an estimated 40 or so individuals took part in anti-abortion protests Saturday, Sunday and Monday at the clinics–and that number included children brought along by their parents.

OR/OSA members focused on four clinics, harassing patients and staff as they entered and exited the office. The group also staged a protest outside of a local Unitarian Universalist church.

Despite their small numbers, the protesters continued the longtime OR/OSA strategy of stalking clinic physicians and their associates in their private homes. Two doctors’ homes were leafleted, and a close associate of one of the targeted physicians reports that a mob of protesters showed up at her house. She says they entered her gated driveway, knocked on her front door, climbed over a fence into her backyard and snapped photos of her family’s vehicles.

It’s not hard to guess how protesters found the doctor’s homes. A website linked as a “resource” by OR/OSA, Forerunner.com, administered by Jay Rogers, purports to list the office and residential addresses of over 70 Florida abortion providers, sometimes with photos of the houses from Google Maps (though much of the information is inaccurate). The targeted Orlando doctors were listed on the site. In the past, such information has been repeatedly used to illegally stalk, intimidate and harass physicians.

Despite a conviction two weeks ago in Charlotte, N.C., of stalking abortion doctors at their homes, OR/OSA leader Flip Benham was spotted at the protests. With him was fellow extremist James Patrick Johnston, who was arrested at an OR/OSA national event in Jackson, Miss., five years ago. Johnston has posted articles supporting violence against abortion providers on the website of the domestic terrorist group Army of God, which advocates the “justifiable homicide” of abortion providers. The Army of God has dubbed Johnston a “Hero of the Faith”–an “honor” the group usually bestows on murderers of abortion doctors.

The Feminist Majority Foundation is working with local law enforcement to protect Orlando clinics and physicians from threats of violence. Says FMF national organizer Jacqueline Sun, one of the Orlando clinic defenders:

These clinics are staying open and women are continuing to receive reproductive health care they deserve–thanks to our efforts, the support of the Orlando pro-choice community and the assistance of the Orlando Police Department.