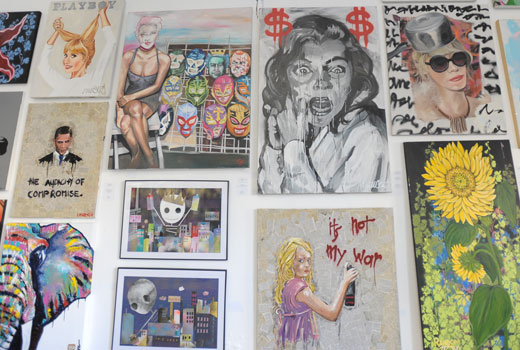 Some of the best work in Art in the Streets, the Museum of Contemporary Art (MOCA), Los Angeles’ graffiti extravaganza, was made by women. Swoon’s towering white and silver Ice Queen manages to be delicate and unapologetically muscular at the same time. Lady Pink’s canvases feature good looking but ungainly female figures painted in a style that just barely sidesteps caricature. In one image, The Death of Graffiti, a naked woman stands on top of a mountain of discarded spray cans, staring at a passing train. Then there are Jane Dickson’s paintings and Margaret Kilgallen’s commanding room of assemblage. Photos and videos by Martha Cooper, Cheryl Dunne and Teen Witch give a gritty glimpse into the street scene. But that just about sums it up.

Among a roster of 50 artists, women are grossly underrepresented in the MOCA exhibition. There are reasons for this, including that street art–like all pockets of the art world–began as a boy’s club. “You have to fight tooth and nail, bitch and scream, be loud and be large to get respect,” said Lady Pink, who started tagging while still a teenager in the 70s. Still, there must be more women, from the past and present, left under the museum’s radar.

In response to this very issue, a well-timed show devoted only to women street artists opened at LAB ART in Mid-City West Los Angeles last week. “Miss Danger on the Loose” includes work by a group of emerging artists who have pasted and tagged on streets of L.A., New York and elsewhere.

Guests had to stand in line to get in to the July 14th opening reception, a testament both to effective marketing and genuine cultural interest in graffiti and its antecedents. Right near the entrance, there was a white canvas with pink and red kiss marks scattered across it, an interactive project that involved guests grabbing lipstick tubes from a nearby basket and smooching or scrawling on the canvas surface. When I arrived, it still looked like the inside of a get well card passed around an office by well-meaning but uninspired coworkers. I’m not sure if the point was to be subversive—re-purposing the trappings of conventional beauty—or just over-the-top girly. Given some of the work, it may have been the latter. 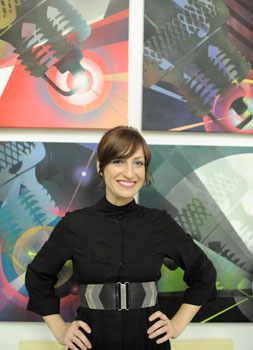 Pin-up girls, flowers and unambiguous political commentary are a bit too prominent in “Miss Danger.” A Marilyn Monroe look-alike with “Post No Bills” written across her thigh and the renderings of chic, long-lashed girls that abound may feel provocative if smartly placed on the street; but in a gallery, they mainly come off as trendy. That said, the hazy paintings of oversized spark plugs by the show’s curator, K H No. 7, (right) and a drooping bicycle cozy crocheted by the artist Olek are genuinely compelling. They seem more interested in navigating day-to-day hurdles of the bigger world than rehashing clichéd symbols of pop femininity.

Shows like this don’t promise to do anything other than present what’s out there and give newcomers a chance to showcase their stuff. In this respect, “Miss Danger on the Loose” succeeds admirably. But there’s no real danger, no Lady Pink style “bitch and scream” fighting or Swoon-worthy muscularity. And even if MOCA’s exhibition underscores just how unfair the world of street art is, it highlights the wicked smarts of the women who have ploughed through to recognition.

Images from the “Miss Danger on the Loose” opening courtesy of LAB ART.