This Is What the National Organization for Marriage Is Scared Of? - Ms. Magazine
Skip to content 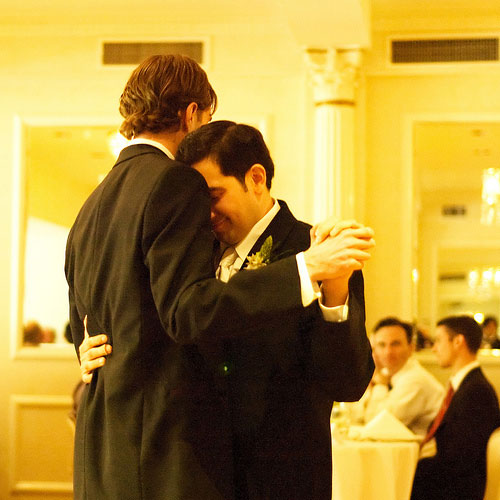 Yesterday marked the day that gay and lesbian couples across New York were finally legally able to marry. According to The New York Times, 659 marriage licenses were issued on Sunday alone.

The anti-gay National Organization for Marriage held their rallies in protest, of course. The Associated Press claimed that thousands showed up. NOM tried to piggyback on that to say that a total of over 10,000 people showed up at its four rallies around the state.

However, pictures from the other rallies, such as the patchily attended one in Buffalo, demonstrate that NOM may be stretching the truth. And of course NOM doesn’t mention how it bussed in folks or where exactly it got the 10,000 number.

But that’s not important right now. Yesterday was the most important day for a lot of New York gay couples. And I want to present a video montage of the various couples getting married complete with their families and friends showing their support.

And I also want to ask the simple question: Why should anyone be scared of this? How do these scenes destroy the idea of marriage?

I dare anyone to give me a good, complete answer. No hypothetical mess derived from board rooms. No junk about marriage being the “uniting of the two halves of humanity.” Give me a concrete reason as to what is wrong with these Americans getting married.

And here are portraits of 20 couples who got married yesterday.

Of course, the federal government doesn’t recognize these marriages, though there’s a bill pending to change that. You can lend your support for the Respect for Marriage Act here.

Adapted from a post at Holy Bullies and Headless Monsters.

Alvin McEwen is 40-year-old African-American gay man who resides in Columbia, SC. McEwen's blog, Holy Bullies and Headless Monsters, and writings have been mentioned by Americablog.com, Goodasyou.org, People for the American Way, PageOneQ.com, CNN.com, The Washington Post, Media Matters for America, Crooksandliars.com, Thinkprogress.org, Andrew Sullivan's Daily Dish, Newsweek, and Foxnews.com. In addition, he is also a contributor to Truthwinsout.org, Pam's House Blend, the Huffington Post, LGBTQ Nation, and Alternet.org. In June 2009, McEwen became the first gay man of color to address lgbt issues on the editorial pages of The State, South Carolina's largest newspaper. He is the 2007 recipient of the Harriet Daniels Hancock Volunteer of the Year Award and the 2010 recipient of the Order of the Pink Palmetto from the SC Pride Movement as well as the 2009 recipient of the Audre Lorde/James Baldwin Civil Rights Activist Award from SC Black Pride.