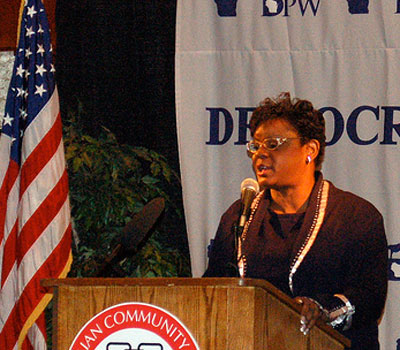 Since the 1960s, when the birth control pill was approved by the FDA, a woman’s ability to access it has been uncertain and unstable.

At one point, unmarried women couldn’t get it. Still today, pharmacists can refuse to fill a woman’s prescription. And earlier this year, Republicans in Congress tried to defund Planned Parenthood, which helps women across America.

This is nothing new. Women’s reproductive freedom and ability to control their own destiny has always been under attack. Every gain is crucial because opponents seem to find new attacks daily.

That’s why we are so fortunate to have allies like President Barack Obama and Health and Human Services Secretary Kathleen Sebelius on our side. Just this week, they intervened to require health insurance companies to cover contraceptives for women at no cost, as part of new health reform law.

Women were among the biggest winners in the new law, and it keeps paying dividends. The law requires insurance companies to provide free preventive care for women. Many of my colleagues and I have been asking the administration to listen to the experts and include birth control as the preventive care package is defined. We are thrilled that the administration has heeded our calls and adopted the science-based guidance from the Institute of Medicine on contraceptive coverage.

And in fact, I hope this is an omen of more good things to come from Washington to protect women’s health, especially at a time when my state of Wisconsin and many other states are actively working to restrict women’s rights.

Women across the country rely on birth control and, sadly, many can’t afford it. Thirty-six million women in the United States are in need of contraception, and more than one in three has struggled to cover the cost of prescription birth control. That’s easy to understand with some co-payments nearing $50 a month. These new guidelines will remove cost barriers and make an immediate difference in the lives of women.

The war against women rages on and we must remain vigilant and continue fighting. But this is a moment to pause and celebrate a great victory for women and their families.

Congresswoman Gwen Moore represents Wisconsin’s 4th congressional district in the U.S. House of Representatives. She is the Democratic co-chair of the bipartisan Caucus for Women’s Issues.

U.S. Representative Gwen Moore was elected to represent Wisconsin’s 4th Congressional District in 2004, making her the first African American elected to Congress from the state of Wisconsin. She serves on the Ways and Means Committee; Science, Space, and Technology Committee; and the Select Committee on Economic Disparity and Fairness in Growth. She is also a member of the Black Maternal Health Caucus, Congressional Black Caucus and the Democratic Women's Caucus. She was born in Racine, Wisconsin and raised in Milwaukee. She graduated from Marquette University. She started a community credit union as a VISTA volunteer and was honored as national “VISTA Volunteer of the Decade” from 1976-1986. Before being elected to Congress in 2004, she served in both the Wisconsin State Senate (1993-2004) and the Wisconsin State Assembly (1989-92). In 2000, Congresswoman Moore earned a Harvard University Certificate for Senior Executives in State and Local Government. She has been honored by several local, state and national organizations for her work as a legislator.