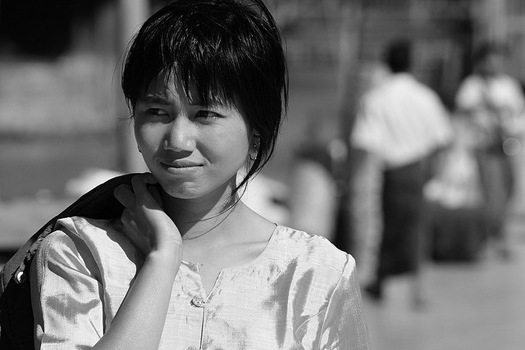 On August 10, a group of 13 women U.S. senators sent a letter to Secretary of State Hillary Clinton calling for support of a U.N.-led investigation of rape in conflict-ridden Burma. The senators urged Clinton to take action after 18 women and girls in the Kachin territory were reportedly raped by Burmese soldiers in late May. Similar accounts [PDF] of brutal rapes of pregnant women, children and the elderly have been documented in the Shan State in northern Burma.

We must not allow this regime to continue to commit such dire crimes while the people of Burma continue to suffer. As members of the Senate Women’s Caucus on Burma, we express our solidarity with our friend and sister, [Burmese activist] Aung San Suu Kyi and express our deep commitment to the struggle for freedom and justice in Burma.

The senators point out that rape is not a side effect of the ongoing conflict, but rather a strategy of war by the Burmese regime. According to the Kachin Women’s Association, Burmese soldiers have been ordered by their superiors to rape women. The letter quotes Nobel Peace Prize winner Suu Kyi:

In June, Suu Kyi made a video testimony before Congress expressing the need for investigation into wide-ranging abuses of power by the Burmese government. Reports of the regime’s use of forced labor, displacement and land confiscation, along with sexual violence, have long been documented by human rights organizations.

The war between the Burmese government and the Kachin Independence Army was, until June, in a 17-year ceasefire. The Northern Shan State was in a 22-year truce until fighting broke out in March. Thousands of Burmese have fled their homes since the renewed violence.

In a statement by the Shan Human Rights Foundation, Hseng Moon called for international action. “Foreign governments dealing with Burma should not be silent about these atrocities,” she said. “‘Business as usual’ means ongoing rape in our communities.”

Call for the UN to investigate human-rights abuses in Burma.