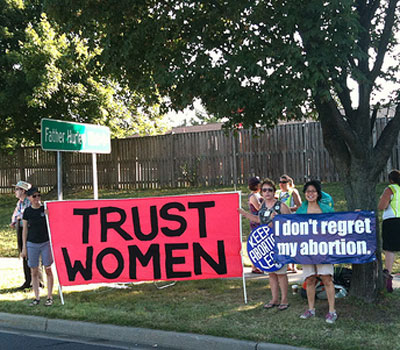 The American Civil Liberties Union of Kansas filed suit this week in an attempt to block a Kansas law that bans private health insurance plans from covering abortions.

According to the Guttmacher Institute, 87 percent of employer-based insurance policies nationwide cover abortions. The Kansas bill forces private insurance companies to remove abortion from the list of standard procedures they cover, unless the life of the mother is at risk. If a woman wanted insurance to cover the cost of an abortion, she would have to buy a separate insurance plan known as a rider to cover that abortion, including in cases of rape or serious health risks. Most insurance companies have said they would not offer such a rider.

Brigitte Amiri, senior staff attorney with the ACLU Reproductive Freedom Project, likened the measure to making women pay a tax on abortions and just another in a long list of initiatives designed to punish and shame women for choosing abortion.

The insurance plans covering abortion are not paid for by the state or with taxpayer money, but still proponents insist this is a reasonable regulatory presence by the state into a purely private market. Proponents argue they are simply trying to limit the number of abortions that take place, despite the evidence that only about 12 percent of abortions are paid for with private insurance.

The ACLU claims the law is unconstitutional because it discriminates based on sex (as it only applies to women) and because it was passed with the intent of making it more difficult for women to obtain and pay for abortion care.

Frankly, it is getting difficult to parse through all the attacks leveled at women’s health care, but Kansas has been one of the greatest offenders. And the fact that this bill attempts to dictate a purely private transaction makes conservative claims of “limited government” ring all the more hollow. Making abortion harder to get won’t eliminate the need for abortion or protect lives. It will do just the opposite.

Ms. Muse: Melissa Studdard on the Power of Poetry to Create the World We Want
White Men Are the Last Best Hope for Herschel Walker in Georgia Senate Runoff
Weekend Reading on Women’s Representation: ‘We Are Meeting Because We Are Prime Ministers,’ Jacinda Ardern Tells Reporter; Ukrainian Women Are Vital in Fight Against Russia