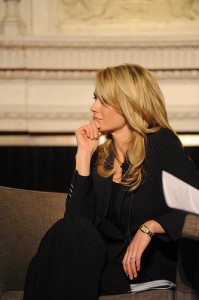 “You never see the photograph of a woman, considered beautiful, that hasn’t been digitally altered to make her absolutely, inhumanly perfect.  Girls are being encouraged to achieve that ideal at younger and younger ages all the time. They end up measuring themselves against an impossible standard and feeling themselves wanting as a result.” — Jean Kilbourne

We hate that, right? So does actor and filmmaker Jennifer Siebel Newsom. Which is why she made the documentary Miss Representation, in which she explores the mainstream media’s unbridled sexism and mistreatment of women.

Scheduled to show on the Oprah Winfrey Network (OWN) in October, Miss Representation is replete with statistics–some we’ve heard before, others new and staggering. Of course you know that women make up 51 percent of the world’s population but only 3 percent of Fortune 500 CEOs and a mere 17 percent of the U.S. Congress. But did you realize that only 16 percent of films feature women protagonists? Ilian, a high school student interviewed in the film, is particularly annoyed by the lack of leading women:

Women are never the protagonists. If they are the protagonist, it’s some drama about getting the guy or something. It’s never really about finding your destiny or whatever the way they say for the guys. Like in Star Trek, it’s like this is your destiny—being powerful, being the captain—but if it were a girl, they wouldn’t say that. And what’s weird about it is that it seems normal for us.  We don’t question it, we don’t say, ‘Why isn’t a girl the protagonist or why isn’t a girl powerful?’

And then there’s my personal favorite interview in Miss Representation, during which assistant professor at Occidental College and Ms. blogger Caroline Heldman derides the way in which even strong female superheros are turned into a “fighting fuck toy.” Besides Heldman, the film is packed with some of our other favorite feminist faces, including Kilbourne, Katie Couric, Rachel Maddow, Nancy Pelosi, Margaret Cho, Geena Davis, Jane Fonda, and Ms. co-founder Gloria Steinem.

The Ms. Blog caught up with Newsom–who’s married to California lieutenant governor (and same-sex marriage hero) Gavin Newsom–to ask her more about what drew her to the project:

Ms. Blog: When was the ah-ha moment when you first recognized gender inequality?

Jennifer Siebel Newsom: When I lived and worked in Africa and there was an expat that I was working with who just dropped these sort of sexist remarks. He was very disrespectful and disingenuous with his words. And [he] would make these comments about me being a young woman and that I didn’t know anything. I think I was in my mid-20s then.

This is the 21st century–why do you think such sexism still exists?

I think it still exists for many reasons. There’s institutionalized sexism that has become a part of the architecture of our country and our success. It’s become that much harder to break. There’s the obvious that women give birth to children and raise children and [this country has] done nothing—or very little—to support or to put an economic value to raising children. And men have succeeded at their jobs at the cost of women basically subsidizing their careers, because the women are staying home raising the kids. I think that’s a huge reason why we still have this inequity. Also, the media has polarized women.

Did anything surprise you during the making of the film, either in the information you were taking in, or in the process?

I did have a sexist experience working with someone, who I ultimately let go, but who came on and wanted to take over and direct the film and was very objectifying of me and condescending. This was a young male. That was a very challenging experience for me, given the theme of the film. I couldn’t believe that he was actually doing what our film was talking about as [being] a bad thing to be doing. In terms of the information, I was shocked by a lot of the statistics. I just couldn’t believe some of the statistics myself, and [in the research] I also started to pay more attention, and I think once you actually start to pay more attention, you see it everywhere, in very subtle ways. What really surprised me is how we just accepted the status quo.

Are you hopeful that films like this will make a difference?

I am confident that we’ll be successful with our movement because studies are proving the economic benefit of having more women in leadership in the government and corporate sector. It’s better for productivity, creativity and the bottom line. I think empowering women is a no-brainer. The fact that we have men and women speaking out against sexism, I feel very optimistic that we’re going to be able to transform the culture. And, hopefully, to help people understand how damaging those, often innocent, little sexist remarks can be. The timing is right.  We’re working with men and women across all generations and we have incredible leadership within the women’s movement and politically, and in the media world even, that understands and recognizes that we have to do something about it now.

Check out the trailer (below) and find a screening near you!