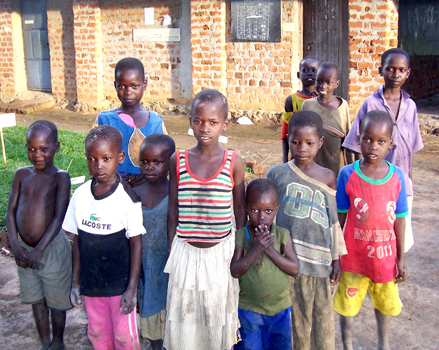 On the brick wall outside Oloo Primary School in northern Uganda, a small chalkboard displays the “attendance record” for students by gender. From first to seventh grade, the number of girls enrolled sinks drastically, from 51 to 4.

The dwindling number of girls in school is the product of many factors, some of which go back decades. Oloo, a small secluded village tucked in greenery, is peaceful now, but filled with traces of the civil war that wracked Uganda for two decades. Around 2003, this primary school served as a training camp for the Lord’s Resistance Army (LRA), a rebel group that fought government forces in the Northern region of the country. Many of the school buildings remain hollowed-out after having been partially knocked down by rebels for visibility and combat convenience. Now, the only well in Oloo sits at the center of the school grounds, and families happily convene with jerry cans, watching older boys play soccer and do gymnastic flips in the field across the way. Still, traveling through the village, I met one noticeable victim of torture, a woman whose ears and mouth had been severed by rebels.

Since 2006, there have been no attacks in Northern Uganda. However, even as Uganda is touted as an exemplar of post-conflict reconstruction, it was clear to me in traveling through the region that many of the Northern areas affected by the war have been left behind. 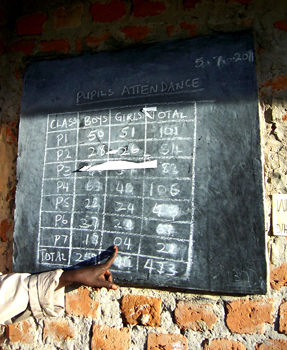 In Oloo, as well as in the nearby towns of Aloi and Alebtong, poverty and a lack of basic infrastructure are quite apparent. Vegetable markets and shops are meager, storefronts are dilapidated, and water sources are few and far between. Every car, motorcycle, or foreigner passing through is something of a spectacle. Moreover, the dynamic in the town is one of subsistence, and little income-generation seems to be occurring. It is clear that the kind of NGO support one sees in big towns like Gulu, or even in slightly bigger districts such as Lira (about an hour and a half bumpy boda-boda, or motorocycle ride, from Albetong) simply does not exist here. Since the majority of development programs in the north are run by international NGOs, this means that much of the Acholi population is left completely disenfranchised. A teacher in the area told me that most citizens in Albetong district lack consistent access to clean water and live on an average of USh 6,000 (Ugandan shillings) a day (about US $2.00).

Most notable in the area surrounding the small district of Alebtong is what the locals call “girl-child problem.” I spent a few days traveling and teaching in Albetong at A River Blue, a donor-funded independent secondary and vocational school designed for the most at-risk teenagers in the area. Most of the boy students and many of the girls had spent time in the bush as abductees of the LRA, but now consider that period of their life over. Though they were welcomed back into the community, in many rural areas there are few resources for educational and financial reintegration. Many young students drop out because parents are too sick to work, or because they have no parents at all. Girls are pressured by their families to marry in exchange for bride prices and as a way of easing the family’s financial burden. A husband brings the promise of an extra income, another home, and potentially more financial support than parents are able to offer their young girl. In a family of many children and little resources, where survival is an everyday struggle, this type of opportunity can hardly be scoffed at. 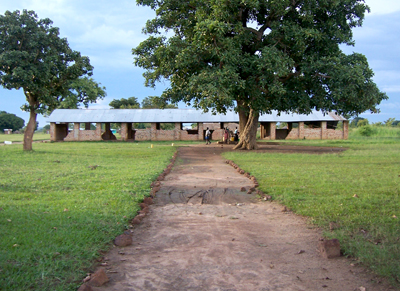 Okweny George Ongom, the school’s coordinator, informed me that one of the young girls was negotiating an exit from the program. Though details were a bit unclear because of translation issues, it appeared the girl was hoping her younger sister could take her spot in the competitive program so that she might marry as her parents wished.

Compounding the drop-out rate is a lack of basic sanitary products or clean latrines for menstruating girls. With all of these factors in play, many young girls simply stop coming to school once they reach puberty.

There is a keen awareness of the problem in the region. Ongom, a well-respected leader in the community, is actively attempting to raise awareness about the “girl-child problem.” The school’s curriculum often centers around questions of teenage marriage and other dangers for “girl-children,” such as unsafe abortion. One teacher told me that such abortions are carried out by way of back-alley pharmaceuticals, but he didn’t to know what drugs specifically were used.

During my time in Gulu, the largest town in Acholiland, I interviewed several UN representatives who candidly voiced their frustrations with the government’s role in infrastructure and reconcilliation programs. Most described the Yoweri Museveni regime as having a “blasé attitude” with respect to implementation of UN mandated guidelines, many of which address gender equity at the educational level. In one official’s office a local newspaper article was tacked to the wall, which cited a 2011 UNESCO statistic: Uganda has the highest high school dropout rate in East Africa. Another official confided that sexual abuses by teachers at the primary and secondary levels have gone unpunished, and that teachers often are able to keep their jobs. The government is quick to sign policy paperwork, but implementation is lacking.

Much of the Northern population is now afraid of provoking any sort of violence, which is one reason why there is little to no criticism of the Museveni regime’s lack of attention to educational reform. After two decades of war, and forced internal displacement into IDP camps, citizens are only now beginning to live without violence.

“They just want to have peace,” one UN official told me. “They know Museveni can’t be opposed.”

She seemed to think that citizens were tired of getting their hopes up with respect to any regime or policy changes. Moreover, after living for years in IDP camps where living conditions were inhumane and any resources were provided by international actors, some small towns seem to have developed one this same UN official called a donor “dependency syndrome.” A River Blue, which has received few donations this year, is beginning to formulate more sustainable income-generating tactics. Most UN experts I spoke to seem optimistic about this shift. Still, it seems that until the Ugandan government–and the international community–acknowledges the scope of the 20-year conflict, its own grave errors and the Northern families still reeling in the aftermath, there is danger that the LRA conflict in Uganda will be forgotten, and so too will the girls (and boys) of Acholiland.