How Can We Interrupt Violence? - Ms. Magazine
Skip to content 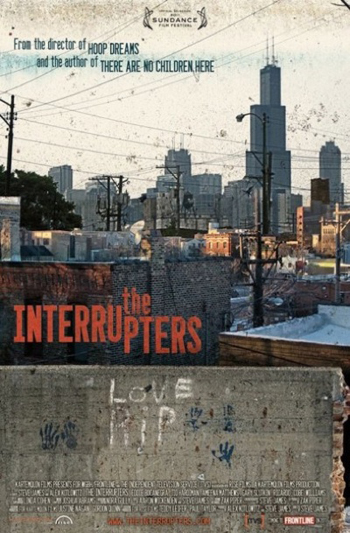 Ameena Matthews is used to being the only woman in a group of men. She even broke into the  male-dominated world of organized crime to become the only woman lieutenant of a notorious Chicago gang. And in the opening scenes of the award-winning documentary The Interrupters, we see Matthews sitting in a large conference room, again the only woman in a group of men. But this time, she’s using her incredible strength and tenacity as a “violence interrupter” with the nonprofit group CeaseFire, working to stop the same plague of violence she once played a part in.

Chicago-based CeaseFire is built on the concept that violence is like an infectious disease, something that can be transmitted from person to person to create an epidemic. Developed by epidemiologist Gary Slutkin after his work on cholera and AIDS, CeaseFire deploys violence interrupters such as Matthews to stop the “infection” at its source before it spreads. Matthews and her fellow Interrupters step in to diffuse fights before guns are pulled—they know where to go because they used to be part of them problem.

The interrupters are integral members of their own communities, so they often know the families involved. When they hear about an incident that might result in retaliation, they step in and try to talk to the person they fear will act out.

Unfortunately, deadly conflicts have become all too common on Chicago streets. “You may hear kids talk about a shooting yesterday, and the way they say it is like the ice cream truck came by,” Matthews explains. While gang and street violence are often talked about as a problem among young men, The Interrupters shows how they affect the entire community, and increasingly young women.

Ms. spoke with Matthews recently about how she became involved in the film, and what can be done to address the violence.

How did you respond when the filmmakers said they wanted to make The Interrupters?

What has it been like since the film came out?

It’s been amazingly crazy. We were able to go to Sundance. I don’t know about you, but coming from my beginnings and where I was before this documentary, Sundance was not on the checklist for vacation spots. The backyard, maybe. Going to my sister-in-law’s Hazel’s house in D.C., that was one of them. But Sundance, Park City? Absolutely not. Going to different film festivals has been awesome, meeting people. I didn’t think [audiences] would accept and embrace this story of mine.

But I’m still out in the community and I’m still seeing the devastation, so it’s bittersweet. When is the action going to come?

Do you feel being a woman affects the way you are received when trying to diffuse a situation? In the film, you’re called a “golden girl” who can get in where guys can’t get in—why is this?

I guess it will contribute to big sister, big momma, big auntie, the one that they really hold a lot of esteem and respect for because of the way that I approach them. Don’t get me wrong, I get in their shit. However, I let them know their good points supersede their bad points. Some people say they ain’t shit, they gonna be like their daddy, they’re gonna be in jail by the time they’re 15. I [say] you’re too smart, you don’t need to do that shit.

Because of the effectiveness of the ladies, [CeaseFire] hired some more violence interrupters that were female.

Have you seen an increase in young women involved in this kind of street violence?

You know historically, gang violence or organized crime has always been the guys that are out there. Back in the day, it was structured. Now there’s not structure. There’s more young girls involved now in activity out there in the streets. Back in the day, the sisters were involved if there was a girl fight, or you’re-messing-with-my-boyfriend type of thing. All the girls that were the girlfriends to the members in the gang would go and fight. But now when you’re looking at this dynamic of violence … we’ve got young mamas, young sisters. If [their brother] has a problem with a person, then everyone is rallying up and they’re fighting.

Like you saw in the documentary–after a guy’s tooth was knocked out, his mother and his sisters came to defend their brother’s honor. It’s so sad, because the way the system is set up, the dads and the older brothers are gone to the penitentiary or are killed, and these young ladies have to stand up and defend their brothers. It’s fucked up.

In the film, they mention that many young men see exactly that in their future–either imprisonment or death before they turn 18. What do you think young women see in their future?

[They see] the same exact thing. “I don’t expect to live past 18,”–you hear that a lot with guys. That’s the same for girls: “I don’t expect to have kids and get married, and if I do have kids its going to be by a couple baby daddies and he’s going to be in jail.” The same devastation cycle that the guys are experiencing, the sisters are experiencing too. It ain’t no different at all.

What do policy makers need to do to address this issue?

The lawmakers here are fighting over some nonsense we shouldn’t be fighting over. And our young kids are out here dying. It keeps our kids stagnated. It keeps them going through the vicious cycle, because there’s nothing there for them.

[Lawmakers] are making it too damn complicated. It’s a no-brainer: These kids are dying. Why is it that we have to bargain with the lawmakers to do the right thing? I blame the ones that can make decisions. [They say] “I can’t make these young kids change.” Yes you can. You make them by giving them other choices, other options.

How dare it be like this, anywhere. This is the United States of America, and our babies are dying like this? That’s fucked up. That’s unacceptable.

The Interrupters was released in select theaters on August 26th. See the website for screenings near you.

TOP: Promotional poster for The Interrupters.