Military Men Speak Out About the End of DADT - Ms. Magazine
Skip to content 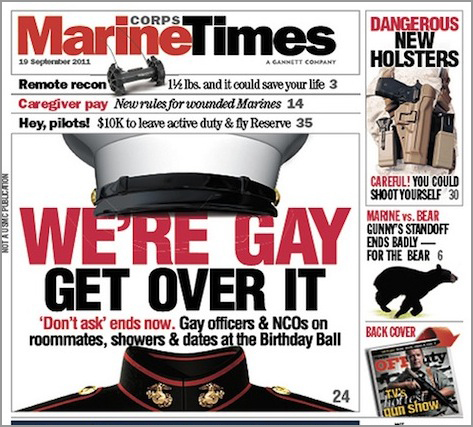 As of September 20, if you’re in the U.S. military and an officer asks if you’re lesbian or gay, you can say, “Yep, I am.” And the next day, you’ll still be an honorable member of the service. Hell, you can say, “I’m here, I’m queer, get used to it!” (But I wouldn’t recommend it.)

After 18 years, the Don’t Ask, Don’t Tell policy instituted under the Bill Clinton administration is over, finis, kaput. Personally, I’ll never forget former Senator Sam Nunn’s tour of the cramped sleeping quarters of a submarine during the hearings he held on gays in the military. The implication, of course, was that gay men sleeping in such close quarters would be unable to restrain their uncontrollable urge to leap naked into their fellow submariners’ oh-so-close bunks. I’ll never forget the feeling of betrayal, too, that Clinton so quickly abandoned his promise to allow gays to freely serve in the military when it met with opposition.

I also remember a famous case of pre-DADT anti-lesbian military harassment that occurred in 1980 in Long Beach, near where I live in Southern California. As Randy Shilts explained in the Los Angeles Times, not long after women were finally allowed to serve on Navy non-combat vessels a witchhunt occurred on the U.S.S. Norton Sound, a missile test ship. First, 23 women were accused of being lesbians, then 19 were threatened with discharge, then ultimately three were formally charged with misconduct. Two were convicted and run from the service; the third woman was spared by her boyfriend’s positive review of her sexual performance. You can’t make these things up.

DADT, while somewhat more humane than the policies of those days, was still highly discriminatory. But the outing, the hiding, the discharges–that’s the past (except for transgender soldiers–that should be next on the anti-discriminatory agenda.) What will the future bring for those serving in the military? We put that question to the Public Insight Network and got great responses from some men who are currently in, or retired from, the military, all but one of whom are straight. (We’d love to hear from women soldiers, too–please comment!!) Here are the themes that came up again and again:

Most of those serving in the military could care less who you sleep with.

Did we ‘suspect’ some people of being gay? Yes. Did we do anything about it? I didn’t. As long as the mission got done, I couldn’t care less. There have been gay people in the military since Alexander the Great.

Most soldiers under the age of 30 don’t really care about sexual orientation. I knew an ultra-macho company commander who had an extremely flamboyant supply sergeant. When questioned about his supply sergeant, the company commander said something to the effect of, ‘Sure he’s a flamer. Gay as the day is long. But he is one helluva good supply NCO.’

I don’t care who is gay and who isn’t, just like I don’t care if you like cats or build train sets in your basemen. The only thing I care about is how well you do your job. One of the best lieutenants I ever had was a gay, African American male graduate of West Point. The best supply sergeant I ever had was a Hispanic lesbian. I’m not just willing to serve with them again, I want to serve with them again.

Rich Hunt, retired from the military:

Service members are about the ability to accomplish the mission, not who sleeps with whom. People need to get a life and accept reality; [affectional] preference is a part of who someone is and not a legitimate way to define them or their ability to do a job.

Nothing much will change after the repeal of DADT.

Other than some initial discomfort for some, I don’t think it will change a bit. There’ll be more pushback in the ground-combat services (Army and Marines) as they are physically closer during operations. … We had a little debate in the shop about DADT when it was enacted, and some people were quite incensed that ‘Clinton let them in.’ When I pointed out that ‘they’ were already in, most of the indignation went away, but there were still objections. I asked if they had had any gays (suspected, of course) work for them; one person said he had. I asked if he had caused any problems, and the answer was ‘no,’ and that he was a pretty good worker. ‘So what’s the problem?’ I asked. Nobody could come up with anything solid. I think that’s going to be the general attitude.

In the combat arms, it will still be a ‘red-neck target’ item. I have hopes that the younger members, particularly junior enlisteds and younger officers, will have been raised in a more enlightened society and that, with them, anyone’s sexual preference will merely be another aspect of their personality, but not something to be shunned, ostracized or otherwise made an item of derision. It will be the senior NCOs and officers, whose careers were predominantly DADT, who might have a difficult time with the situation, particularly if any LGBTQ service member is … ‘in your face’ about their LGBTQ status.

The military will always be the most highly disciplined segment of our population. They will fall short, but they will adapt. The military has always been used as the experimental environment for social change. We follow orders. … We adapt.

Those who suffered under DADT and other anti-gay military policies were hurt and are still hurting.

My niece was in college with an Air Force scholarship when someone ‘outed’ her. She lost her scholarship, got kicked out of the program and was forced to repay the Air Force for the costs that she had incurred up to that time. She had to drop out of school and get a job to survive since her parents were very much against homosexuality and would not support her. In the long run, it has turned out OK: She worked hard and repaid the money; she has now completed her college degree program and has both a very nice partner and an exciting job. But she went through hell for a while and the Air Force lost someone who would have made an excellent officer.

Phillip Zimmerman, a veteran honorably discharged in 1986 for being gay under the witchhunting, pre-DADT Naval Investigative Service:

The effect of being discharged for being gay has had a lifelong effect on me. One day I was an Arabic/Farsi linguist who was an asset to the government; the next day, I was essentially a janitor after the NIS had my security clearance pulled. I did not realize that I was still affected by this horrific experience until January of this year, when I discovered that the man who turned me in for being gay was being hailed as a ‘hero’ of the DADT movement and a ‘profile in courage.’ I cried like I have never cried in my life as I read his account of being a gay man and serving for 20 years and ‘never hurting anyone.’ I eventually found a way to contact him, and he essentially told me that ‘his ex-wife made him turn me in’ and that ‘it’s old news, nothing can be done about it’ and ‘get over it.’

Life will hopefully be better in the military now for LGBT folks–and everyone else.

It seems the military has been proactive on this, and I believe that will make a big difference. There will always be an ‘anti’ cadre, as there are still racists, but they’ll fall in line, at least while on duty.

David O, a member of the Air Force:

What will be different is that gay friends and colleagues won’t have to live quiet lives of fear and loneliness. Also, those of us who are friends of gay and lesbian servicemembers won’t be shut out of our friends’ lives because of fear of losing a friend or someone turning them in. Case in point: My best friend from college purposely avoided a lot of contact during our first 10 years after college because he was scared that if I found out he was gay I could shun him or regret our friendship during Military College. We have since restarted our close friendship and I hope not to have such a break again.

The military does not seem to realize this yet, but they already have an excellent model and precedent to use for policies after DADT. They need only look at how they handled integrating racial minorities. They had excellent success there.

Ironically, I am now a member of the United States Coast Guard Auxiliary, which has an amazing diversity policy. I am proud to serve this country again in uniform, and hope that one day, the incredible injustice that I experienced will be addressed and corrected by our government.

It’s heartening to hear that the reactions of straight men in the military to the end of DADT range from shoulder-shrugging to welcoming. But we must admit, we’re perplexed as to why 95 percent of those who answered our call have been straight men. Even given military demographics, that’s skewed. Military members who are women, gay or transgender, we especially invite you to share your thoughts in the comments!