The Cost of a Non-Diverse Media - Ms. Magazine
Skip to content 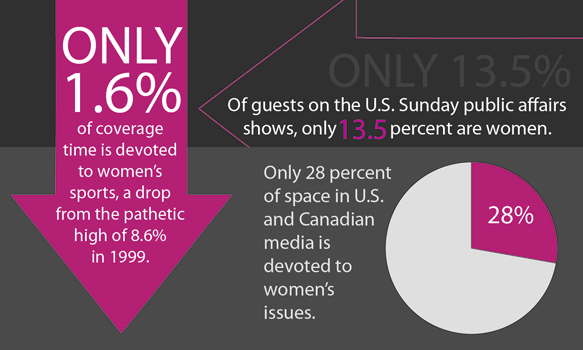 “I had journalists say to me: ‘I saw the women on the field. But they were so pitiful-looking that I didn’t film them,’” recalls Gini Reticker, director of the 2008 documentary Pray the Devil Back to Hell, which documents women’s peace efforts in Liberia. While she had trouble finding footage of Liberian women’s peace actions, it was, however, easy to find hours of tape glorifying the AK-47-wielding boys who had been forced into warring militia.

With this disparity, the international media–much of it based in the U.S.–betrayed an enormous gender bias. On the one hand, young men, preyed upon and once-powerless, were recorded and elevated, despite dehumanizing and horrific actions. On the other hand, women who seized their own authority, created community and changed the course of a whole nation for good were absent from the public media record–and thus, nearly lost to history.

What is the societal cost when the media fails to be fully inclusive of the majority of its population in its storytelling? For one thing, as in the case of Liberia’s civil war, the real history is lost. How many voices of women or people of color were heard on U.S. TV or radio during this summer’s “debt limit” fiasco? Very, very few from my viewing, especially of the financial channels. So we did not hear the story of how the stimulus program, a key factor in the debt crisis, had less impact on women. In fact, women are bearing the brunt of the extended recession, being rehired at a much lower rate than men. Over 12 percent of households are run by unmarried women. Among African American women, that figure leaps to 29.1 percent. But the stories of how these women are struggling to feed their families are missing from the airwaves.

On the abortion billboard fight in Atlanta, CNN insisted on a debate. They invited Catherine Davis, director of minority outreach for Georgia Right to Life and for the other side they invited an expert on race……To intentionally choose not to select a Reproductive Justice organization that is woman-led, is more than an oversight.

The race expert interviewed by CNN, a man without a reproductive justice background, spoke solely about race. He was trounced in the debate for failing to provide a gendered reproductive frame.

New media technology formats are not immune to gender or racial biases. Shireen Mitchell, founder of Digital Sisters, a DC based technology education not-profit, frequently speaks of the failures of digital architectures to be race-and gender-inclusive. For example, the microgrant website Kickstarter, included no women among the projects it spotlighted in its 2010 tongue-in-cheek awards list.

One media arena, at least, is supposed to be free of such biases. U.S. broadcast media, because it uses public airwaves, was mandated to be diverse in the Communications Act of 1934 [PDF]. This intent, thanks to Representatives Bobby Rush and Cardiss Collins, was reaffirmed and strengthened in the Telecommunications Act of 1996.

This past July, a 3rd Circuit Court of Appeals decision lent teeth to that mandate. Saying the FCC has failed to adequately address its diversity mandate, the appeals court denied an FCC to ease the rules on cross-newspaper/broadcast ownership (to allow, say, the same company to own a TV station and major newspaper in the same city).

According to research by Howard University communications professor Dr. Carolyn Byerly, based on the (very scant) existing FCC data, a mere [PDF] 5 percent of television and 6 percent of radio broadcast stations are women-owned, meaning that their governing boards are at least 50 percent women.

Yet, according to NOW and other organizations who filed comments [PDF] in the case, the FCC is supposed to:

review and eliminate barriers to entry for underrepresented groups, including women, minorities, and small businesses, and to develop policies to encourage their acquisition of broadcast licenses.

Where did the FCC fail? Free Press lawyer Corie Wright, who argued the case against the FCC before the 3rd Circuit, explains:

First, women and people of color were not awarded valuable broadcast licenses when the FCC initially doled out the broadcast spectrum. Second, there’s been discrimination in the lending and advertising markets. Finally, media consolidation makes it harder. Women and people of color tend to be single license owners. It is very difficult to compete against large conglomerated owners.

“The FCC has for decades abdicated its responsibility to ensure that the public airwaves are used in the public interest,” laments Feminist Majority Foundation Vice President Kim Gandy, who was president of NOW when in 2007 it filed the comments.

Byerly calls the circuit decision an “open door” for women and people of color to demand more diverse broadcast ownership. The Media and Technology Task Force of the National Council of Women Organizations–which was formed in response to Don Imus’s racist remarks about the Rutgers women’s basketball team–has reconvened to address the opportunity. (Full disclosure: I co-chair the task force.)

“Attend board meetings of your local PBS and public radio channels,” encourages Deedee Halleck, a long time media educator and activist. “If they receive CPB (Corporation for Public Broadcasting) funding they must be open to the public.” This right was incorporated into federal law, hard fought by the independent film community and coalitions in the 1980s. Women could agitate for more programs like the Women, War and Peace series or insist that PBS shows such as American Experience explore women’s lives as often as it does men’s.

Or women can follow the pocketbook approach advocated by Jacki Zehner, co-chair of the philanthropic group Women Moving Millions:

Stop purchasing media that is unbalanced, send emails to express your concerns, or better yet put your investment capital behind ventures that could change the landscape.

Increasing women’s ownership in broadcast media is a long-term process, according to Brandy Doyle, the Policy Director for Prometheus Radio Project, who says:

That’s why Prometheus works to put media in the hands of those historically disenfranchised from media ownership with community radio licenses. We need both a strong community media sector and an equitable commercial media sector to see a change in the media landscape.

Last fall at the SPARK Summit, Geena Davis, the actress and girls media advocate, declared, “Girls, surround yourselves with empowering media.” Women’s media organizations such as Reel Grrls, New Moon Girls and imMEDIAte Justice put out just that. Daily works from these entities form the backbone of what programming might be available on women-run television or radio in the future. Infrastructure in distribution and marketing is needed now so the critical building steps are in place in order to achieve longer term goals. Such well-developed women’s content is essential to providing programming on broadcast television and radio. Women-led media by in large tends to center women experts and women’s experience at the core of its story telling. These are the perspectives that would ensure a more diverse media.

Abigail Disney explains that the lack of such perspectives prompted her to create Pray the Devil Back to Hell,

How was it possible that these Liberian women had accomplished such an enormous feat without having been noticed and reported on by the news outlets [The New York Times, The Washington Post] I had come to know and trust?

Most recently, Disney and her co-producer Gini Reticker joined forces with WNET’s Wide Angle producer Pamela Hogan to create a five part series, Women, War & Peace, which will air between Oct. 11 to Nov. 8 on PBS. “This series is rare in that it puts women at the center of an analysis of conflict and peace,” says Donna Williams, Senior Publicist for WNET.

Pray the Devil Back to Hell will air on the 2nd night of the series, on Oct 18th (check local listings). You will be amazed how powerful Liberia’s women are–far, indeed, from “pitiful”! Women must continue to make emphatic demands of the media industry, the FCC and themselves to ensure that shows like this are no longer rare.

Ariel Dougherty is a teacher, filmmaker, producer, writer and advocate who has worked in the feminist media and cultural communities since 1969, when she co-founded Women Make Movies. She advocates in writing, before funders and donors, at meetings and conferences for the inclusion of more feminist content in our daily media. She initiated Media Equity Collaborative to umbrella this work.

Ariel Dougherty – teacher, filmmaker, producer, writer, advocate – has worked in the feminist media and cultural communities since 1969.  Her nescient youth film teaching merged with the birth of the women’s liberation movement. Women Make Movies was co-founded by her in 1969, first as a production collective, and in 1972 with Sheila Paige she created the organization as a community based production teaching workshop for women, with distribution set up as a critical income arm. Ground breaking and award winning films she produced are: The Women’s Happy Times Commune (1971); Healthcaring (1976); and most recently, !Women Art Revolution (2010).  Songs, Skits, Poetry and Prison Life (1974); Surviva (1981) and From the Interior, Colonized (1992) are among her own films. She also anchored a public access show, Cultural Democracy/Ecology (1989-91) In recent years Ariel has zoomed in on increasing the visibility, use of and support for women-centered content. She advocates in writing, before funders and donors, at meetings and conferences for the inclusion of more feminist content in our daily media. And for its funding! She initiated Media Equity Collaborative to umbrella this work.