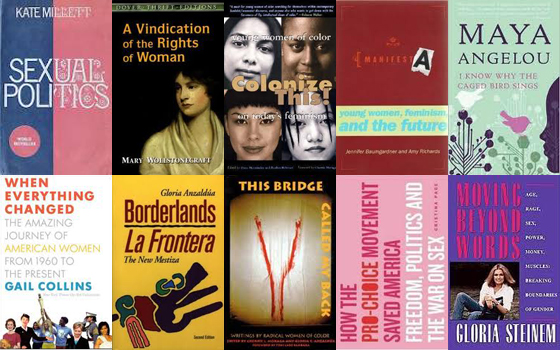 Many of books 21 to 30 were famous for challenging the status quo–whether that be male supremacy in general or privilege within the feminist movement. In this section you’ll find the defining works of Chicana, women-of-color and third-wave feminism (as well as one landmark anthology at the intersection of all three). Last, two 21st-century historians look at the remarkable changes wrought by feminism over the past 40 years.

30. How the Pro-Choice Movement Saved America: Freedom, Politics, And the War on Sex
by Cristina Page
Basic Books, 2006
Part critique of anti-choice tactics, part celebration of pro-choice liberation, Page’s lively history details the  Right’s implacable anti-contraceptive and anti-sex movements along with the successes of the sexual revolution. Find it here.

28. A Vindication of the Rights of Woman
by Mary Wollstonecraft
1792
What may be the first work of feminist philosophy, written after the French and American revolutions, calls for unprecedented improvements in the lives and rights of women. Find it here.

27. Borderlands/La Frontera: The New Mestiza
by Gloria Anzaldua
Aunt Lute Books, 1987
In this foundational Chicana feminist book, Anzaldua reflects upon life on the border between Mexico and Texas, which she depicts beautifully through a mixture of languages, histories, observations, myths, poems, essays and experiences. Find it here.

26. Moving Beyond Words: Age, Rage, Sex, Power, Money, Muscles: Breaking the Boundries of Gender
by Gloria Steinem
Bloomsbury, 1994
This collection of six essays from Steinem features three never before published and three drawn from the pages of Ms.; Steinem reflects on growing older, critiquing Freud and overcoming barriers to feminism. Find it here.

25. Sexual Politics
by Kate Millett
Doubleday, 1970
A feminist book of literary criticism that has been controversial since its publication, Millett’s doctoral dissertation helped fuel ’70s feminism. Find it here.

23. When Everything Changed: The Amazing Journey of American Women from 1960 to the Present
by Gail Collins
Little, Brown and Company, 2009
With her signature wry storytelling, New York Times columnist Collins spins a comprehensive and celebratory account of the last 50 years of American women’s history. Find it here.

22. This Bridge Called My Back: Writings by Radical Women of Color
by Cherrie Moraga and Gloria Anzaldua, editors
Persephone Press, 1981
This collection provided a new and necessary coming-together of diverse feminists of color, including Merle Woo. Audre Lorde, Barbara Smith, Toni Cade Bambara and Ana Castillo. Find it here.

21. Manifesta: Young Women, Feminism, and the Future
by Jennifer Baumgardner and Amy Richards
Farrar, Straus, and Giroux, 2000
Seeking to define the “third wave,” two young Ms. writers examine how feminism permeates every facet of young women’s lives. Warning that the fight isn’t over, they rally their generation to press on. Find it here.