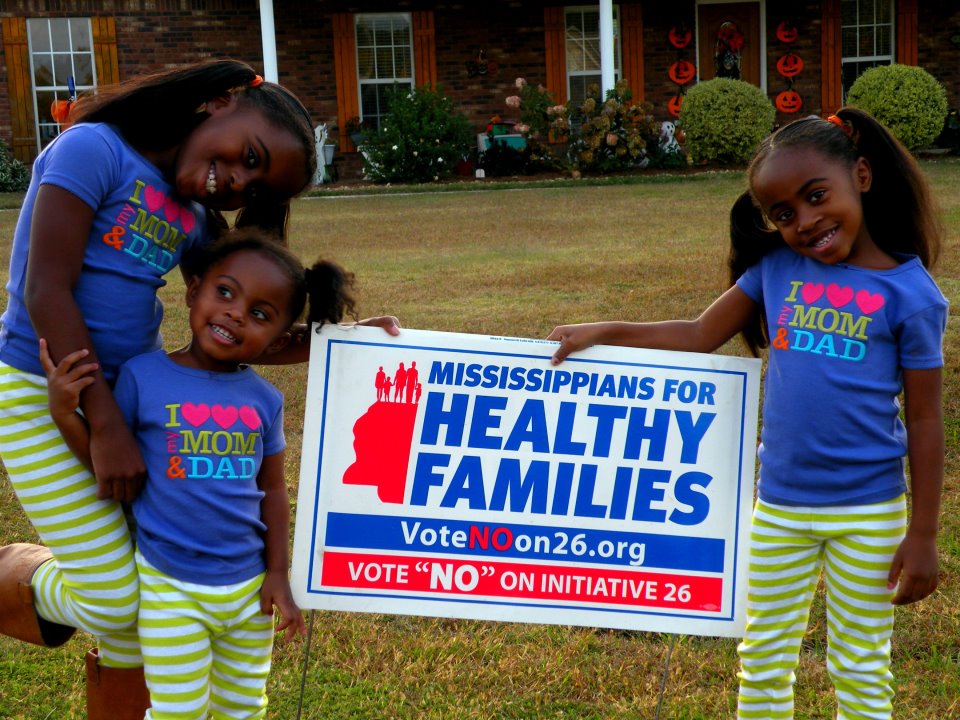 The headlines all say it: “Personhood defeated in Mississippi!” This was a tremendous victory for the pro-choice movement, one that started campaigning on the ground only September 8, years after proponents of the “Yes on 26” ballot initiative flooded the state with a superbly orchestrated campaign that included well-financed organizing and petition drives. As of this writing, 55 percent of the voters rejected this dangerous, precedent-setting initiative that would have declared a fertilized egg a “person” and outlawed most contraception and in vitro fertilization while criminalizing abortion–even in cases of rape and incest. These unintended bad consequences even persuaded conservative voters to defeat the initiative, splitting the traditionally unified anti-abortion base.

Mississippi was a people’s victory, a triumph in which people of all backgrounds, races, professions and religions came together. Congratulations are definitely in order for the tireless activists in the state and for those professional campaigners who came from out of state to direct the No on 26 campaign, led by Mississippians for Healthy Families. The grassroots efforts of many courageous Mississippi activists demonstrated that overreaching zealots who do not care about women’s lives could be rebuffed even in the reddest, most religious state in the South. The professional campaign strategists were right in targeting their efforts at conservatives and independents by magnifying the anti-government sentiments in the state–sentiments that are a holdover from the Civil Rights movement and have been recently stoked by the Tea Party.

The supporters of the personhood initiative could not hoodwink people in Mississippi because great folks like Valencia Robinson of SisterSong and Allison Korn of National Advocates for Pregnant Women threw their hearts into the campaign, knowing that Mississippi does not have the pro-choice infrastructure of states like New York, California, and even Colorado. It was a great success for the pro-choice movement and set radical anti-abortionists back on their heels after they invested millions of dollars in the state.

It was not, however, a total victory for the Reproductive Justice movement. At the same time, Mississippi voters approved Initiative 27, a “voter ID” initiative requiring government-issued identification in order to vote, a direct threat to the Voting Rights Act. Consider this: Even on November 8, some black voters were questioned about their ID and their right to vote. One poll worker asked Michelle Colon, a grassroots activist, why she did not recognize her. Michelle had voted at the same precinct for seven years.

The very voters who elected a Republican governor and supported the Voter ID initiatives broke ranks and rejected the Personhood Initiative. What this means for future elections is ominous and should be carefully analyzed.

Millions of dollars of staff and resources poured into Mississippi from around the country to defeat 26, the personhood initiative. What if those same resources had been equally devoted to defeating 27, the Voter ID initiative? We may never know what would have happened.

What if campaigners had listened to Mississippi activists, done polling, created commercials, distributed comparable campaign literature and put an equal amount of lift under defeating initiative 27 as we did 26? Could we have saved the right to vote in Mississippi at the same time we saved–at least for now–the right to obtain an abortion?

We have to ask why millions of dollars in resources weren’t poured into the state to stop the voter ID exclusion initiative, which will disenfranchise thousands, especially African Americans, immigrants, married women, transgender people and Native Americans. We have to ask why it took so long for our side to start mobilizing on the ground, only establishing a campaign office less than two months before the election. We have to ask why the name of the black candidate for governor, Johnny Dupree, was reportedly not on the electronic ballots at some precincts. Most of all, we have to ask why opponents of the personhood initiative did not see the link between that and the voter ID exclusion initiative–which is the simple fact that if Mississippi women cannot vote, they cannot ensure their continuing abortions and contraceptive access.

Because we could have won on both.

I do not have yet have the data on voting by race so I don’t know if the overwhelmingly Democratic African American electorate made a difference on 26, but I suspect it did. If they did vote against the personhood initiative as they had been urged to do, thanks are owed to them from women around the country, for whom Mississippi was our Maginot Line.

What this will mean for the future in Mississippi may be predictable. The anti-abortion movement will probably try to achieve the same personhood goal legislatively that they tried at the ballot box. Given the preponderance of anti-abortion legislators in the state (with more to come with voter ID exclusions), they may have a better chance of persuading the legislature to pass yet another bill restricting abortion. The state already has a forced 24-hour waiting period, compulsory sonograms and only one abortion clinic, to which an out-of-state doctor has to fly to deliver services.

The pro-choice movement will, of course, fight them every step of the way. One of the more positive legacies from the No on 26 fight will be an energized and mobilized grassroots movement in the state available to continue to wage the just war against these opponents of women’s human rights. Bridges have been built across race, gender and class in defense of abortion rights, and if nurtured, these bridges can pay off in the end to counter future anti-woman measures.

Even as we celebrate, we have to watch other states for similar personhood efforts. The list is daunting–Florida, Montana, Ohio, California, Oregon, South Dakota, Michigan, Nevada, Georgia and Wisconsin have been mentioned in media reports speculating about future threats. These radical campaigns will vacuum up our limited resources in an ongoing war of attrition sadly too familiar to us.

What this will mean for voting-rights champions is less clear. Already, Mississippi community activists are working to determine precisely what types of government-issued identification will be demanded when people go to the polls in 2012. They are assisting people in obtaining such ID, where possible, and considering legal challenges when people are denied the right to vote. They are underfunded and working beneath the media’s radar, but they are determined to not stop fighting for the right to vote in Mississippi. They have never stopped and will never give up, never give in.

By today, most of the out-of-town folks will be catching flights home, celebrating their tremendous victory and catching up on much-needed sleep. This is a great day for those of us who fight for abortion rights. If I blink fast and hold my nose for a moment, I can briefly forget that we have won the battle, not the war.

Loretta Ross started her activist career in the 1970s—launching projects with the National Organization for Women; organizing with the National Black Women’s Health Project, the Center for Democratic Renewal / National Anti-Klan Network and the National Center for Human Rights Education; founding the D.C. Rape Crisis Center; and co-founding the SisterSong Women of Color Reproductive Justice Collective. She retired as an organizer in 2012 and is now a Visiting Associate Professor in the Program for the Study of Women and Gender at Smith College. Loretta is the co-author of Reproductive Justice: An Introduction and was lead editor of Radical Reproductive Justice: Foundations, Theory, Practice, Critique. Her forthcoming book, Calling In the Calling Out Culture: Detoxing Our Movement, is due out in 2019.