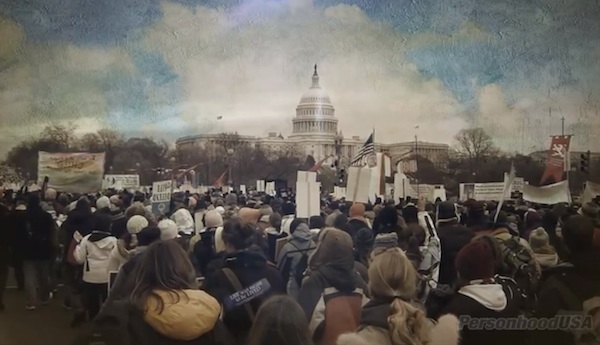 Personhood USA, the group behind the anti-abortion ballot initiative strategy so absurd that it has never come close to passing, wants you to know it’s not giving up. The group, which agitates for fertilized eggs to be declared “people” with full legal rights, is undeterred despite Tuesday’s defeat of such a “personhood” amendment by a margin of nearly 20 points in Mississippi.

Such amendments, if they ever managed to pass, would ban all abortion outright. They would also potentially outlaw many types of birth control and open up miscarriages to criminal investigation.

The organization has just released a dramatic video to get the word out about the personhood movement. In it, they compare their efforts–which, if successful, would turn wombs into crime scenes and create a whole new class of criminals–to the decades-long fight against Jim Crow laws, racial segregation, voter suppression and widespread racial violence targeting African Americans.

Like many groups in the anti-abortion community, personhood often makes allusions to slavery and civil rights. The group’s new video shows footage of Martin Luther King Jr. while declaring personhood to be “the new civil rights movement of the 21st century.”

You can read more at The American Independent and check out the newly released video below.

ABOVE: Screenshot from Personhood USA video of Anti-abortion protesters marching in Washington, D.C.