No Joy in Penn State, But a Flicker of Hope - Ms. Magazine
Skip to content 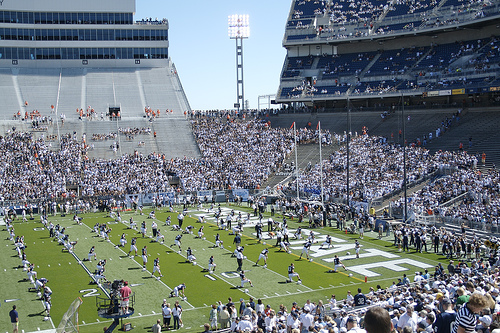 No one knew exactly what was going to happen.

But as the Penn State Nittany Lions walked onto the field at Beaver Stadium on Saturday, the applause that grew in the stands was loaded.

How do you clap for a program led by a man who knew that one of his coaches molested at least one kid in his locker room? How do you cheer for a program that in this past week showed that at least two coaches and university leadership knew that Jerry Sandusky was an active child molester, but yet they did nothing? How do you cheer for a school whose students just a few days ago rioted when they were informed that football coach Joe Paterno, or “JoePa,” was being fired for his role in the Sandusky scandal?

JoePa, like many of the Catholic priests and members of the hierarchy who covered up abuse in the Catholic Church, was an “idol with clay feet”–one who crumbles because of a lack of moral foundation. The Penn State community and college football fans throughout the nation worshipped the long-time coach. Yet when the truth about his inaction and cover-up of the Sandusky case came to light, we all learned that Paterno put a football program and a coach above a child who had been sodomized. In the sports world with its handy clichés, we saw “the man behind the curtain,” and we realized that we had been duped.

As we Catholics who fight for priest-abuse survivors know too well, every Catholic diocese has its own JoePa. In Philadelphia, that man is Msgr. William Lynn, currently under criminal indictment for child welfare endangerment. In Boston, that man was Cardinal Bernard Law, who allowed dozens of child predators to have access to thousands of children.

And in every diocese where these men worked, there are parishioners who loved and admired these priests. Men and women confessed their sins to them; sought spiritual advice and guidance from them; asked them to perform their marriages and baptize their children; placed their relationship with God in these men’s hands. The betrayal is tremendous. These parishioners saw “the man behind the curtain,” and they, too, were sickened by what they saw.

Unlike Penn State, however, the Catholic Church has done little to nothing to clean house and hold accountable those who hurt children or covered up for them.

Fortunately, there is hope–at least for Penn State. Clapping did fill the air in Beaver Stadium on Saturday. Was it stubborn support of a popular team? Or misguided support of a fallen idol? Judging by the number of fans wearing blue for child-abuse awareness, I’m leaning toward a third answer: Fans were applauding for a school that, while wracked with scandal, has started to rid itself of coaches and administrators who hid abuse.