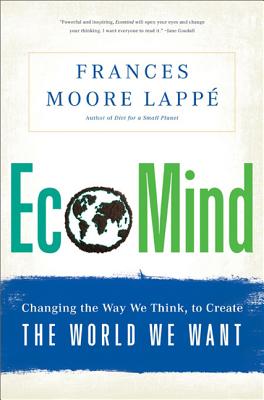 The latest book from environmentalist Frances Moore Lappé–author of the bestselling Diet for a Small Planet—could not have been published at a better time.

As Occupy protests across the United States challenge gross economic disparities, Lappé’s EcoMind calls for a drastic rethinking of how markets should work, in a grand vision that weaves together environmental and social justice.

Critiquing the current system, she writes:

…[R]ather than creating wealth, more fundamentally our economy is designed to concentrate wealth, a form of concentration involving the vast destruction of real wealth, the health of the natural world, including human life. Today, 60 percent of ecosystem functions that sustain life worldwide are “being degraded” or used in ways that can’t last.

Since what we’ve been calling “growth” is largely waste and destruction, let’s call it what it is: a system that in fact stymies growth and even quickens diminution and death—of genetic and social diversity, health, relationships, beauty, happiness, art forms, languages, and ancient knowledge.

Reframing the issue, writes Lappé, requires that people deny the paradigm marketed to them by private industry: that only unfettered capitalism will bring “growth.”

Rather, Lappé encourages readers to think of markets like ecosystems.

Think of a stream and the ways in which water, energy, bacteria, plants, fish, insects, sands and rocks are all interacting within one another. When one thing changes—water flows decrease or a new type of fish enters the system—all other components shift and adjust, even if just slightly.

In this paradigm, saying no to waste in the production stream—to the more than 40 percent of the U.S. food harvest that is never consumed, to the 55 percent of electricity squandered before it reaches customers—does not mean we must go without. If the economy functioned like an ecosystem, money and goods would continue to flow, rather than being concentrated or trapped in one place.

As Lappé explains it, admitting that all components of a system are interrelated and remembering that every one act has multiple effects would help people perceive many different problems—from the obesity and hunger epidemics to the concentration of power and wealth—through a different lens.

Thinking like an ecosystem is an enticing idea. And it’s one that shows Lappé’s faith in busting apart common misperceptions—including that humans have become too far removed from nature. Humans may have shifted toward the cities, tethered our children to televisions and iPads, forgotten how and where food is grown, and um, you know, wreaked havoc on the planet. But really? We just started making such a huge mess of things. As Lappé writes:

It’s not always been this way. Much of the systematic destruction we’re now experiencing is a great and brief aberration.

If all human history were squeezed into one week, and the clock started on Monday, our industrialized world—spanning only about seven generations—would emerge at three seconds before midnight on Sunday. In the one hundred years of the twentieth century, humans used ten times more energy than we did in the previous 1,000 years. In fact, 60 percent of the increase in atmospheric carbon dioxide levels now threatening our planet has occurred just since I was a high school freshman in 1959.

So what we are experiencing may be horrific, but it is not the norm of human experience. It is not “conventional” or “business as usual.” Let’s banish the terms. It is rather a huge and failing experiment, a sudden, radical detour.

There are local movements everywhere demonstrating how we can return to a more harmonious existence with the natural world. People are remembering the taste of homegrown tomatoes and placing value on knowing their local farmers. Local governments are seeking new ways to design communities and transport people around them, and in every state, young people are joining with retirees to demand participation in real democracy.

EcoMind should not be read once and stuck on a bookshelf. It should be shared with friends, discussed and challenged with others who are ready to make positive and enduring changes within their communities. Lappé provides examples of small scale-projects worldwide that are changing the ways in which people think about their own lives, reinvigorating local food systems and wresting power from private industry.

There are big problems in the world; there’s no doubt of that. And together, Lappé writes, we can frame the issues ourselves and align our actions with nature. Then, we can find real solutions.

Photo of cover of EcoMind by Franes Moore Lappé. Buy it here.