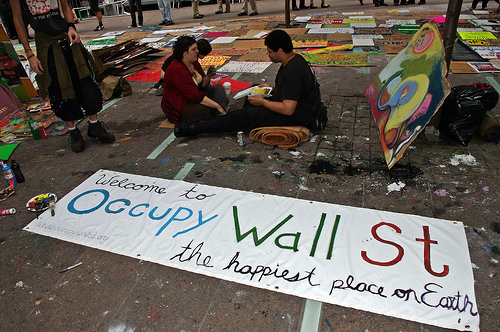 These days, anyone craving an update on Occupy Wall Street can tune into the media and chose between two completely incompatible narratives. From conservatives such as Newt Gingrich, we hear “[the Occupy protesters] start from the premise that we all owe them everything,” along with his now-famous taunt, “Go get a job, right after you take a bath.” Conversely, on the left, Princeton Professor Cornel West defended the movement, explaining: “It’s a non-violent process. But it is a revolution, because these oligarchs have been transferring wealth from poor and working people at a very intense rate in the last 30 years and getting away with it.”

Meanwhile, below the radar of the predominant media coverage, feminists are debating the extent to which this movement can address issues deeply affecting women’s lives and their rights.

We might gain some insights from a look back, 43 years ago, to a strikingly similar movement that changed the cultural consciousness of its time and profoundly influenced feminism: The Events of May ’68, one of the most pivotal moments in contemporary French history. These “les evenements”  brought routine life in Paris to a halt, as an unprecedentedly eclectic mixture of students, workers, avant-garde thinkers, anarchists, Marxist intellectuals and, yes, women’s rights advocates marched in solidarity for social and economic reform. They occupied the Sorbonne University and prompted one of the largest general strikes in the history of 20th century Europe. By May 22, the number of French citizens involved rose to an estimated 6-10 million, or roughly one-third of the French work force. Before it was over, the revolutionary fervor drove President de Gaulle into hiding at a French military base in Germany, along with his wife and a very large suitcase, rumored at the time to contain his family’s jewels.

Flash forward to OWS, Fall 2011–a different movement, belonging to a different time and place, but with some compelling parallels:

But if May ’68 and OWS are similar, what if anything does this bode for the success of OWS ? May ’68 after all was in many ways deemed a failure. Far from producing a revolution, it ended with the reemergence of a strengthened de Gaulle administration. OWS is not over yet, but already it has been subject to some of the same criticisms that were leveled against the May ’68 movement, which range from mild to hyperbolic. Detractors of OWS contend that it is unfocused (with no clear leadership); pointless (with no clear-cut demands); counterproductive (those who have jobs can’t get to work); and last but not least, as Mitt Romney accused (before later changing his mind), “dangerous” and “class warfare.”

Despite these dismissals, both movements have arguably challenged and changed the prevailing discourse of their times about social equality and economic justice. As Julian Bourg notes in his book on May ’68, “For some, May-June 1968…passed into memory, but for those who wanted to continue the fight, it soon became a touchstone, a rallying cry, and a myth.” OWS has already succeeded in highlighting the sharp economic disparity in this country. Without the protests, the American public might never have seen the now widespread chart exposing the gross income disparity between the nation’s wealthiest 1 percent and the other 99 percent. The protest has also caused the news media to dramatically shift focus. According to statistics from the Pew Research Center, 22 percent of the news for the week of November 14-20 covered the economy and 13 percent of the news specifically focused on Occupy Wall Street.

But if history does repeat itself, then feminists can take heart about the promise of Occupy Wall Street. Despite the anti-climactic ending to May ’68, many agree that a lasting legacy of the movement was the invigorating of French feminism. Prior to 1968, it had often been characterized as quieter than American feminism–more literary and theoretical, less activist. While American women won the right to vote in 1920, their French counterparts had to wait until 1944. During May ’68 however, women from groups such as Simone de Beauvoir’s  psychanalyse et politique protested alongside French men. According to French feminist Anne Zelinsky, who participated in the protests, “May ’68 was not for women, but it authorized them to fight.” The French media later imposed the name MLF (mouvement de liberation des femmes) on the diverse women’s rights groups that emerged after May ’68, and the name stuck. In 1970, the MLF engaged in one of the first widely publicized subversive French feminist acts when they marched to the Arc de Triomphe in Paris and placed a wreath inscribed “to the unknown wife of the soldier” on the famous Tomb of the Unknown Soldier. In 1975, the group Choisir (to choose), an offshoot of the MLF led by lawyer Gisele Halimi, was influential in helping to pass Health Minister Simone Veil’s law legalizing abortions. French feminist activism has also expanded since then to include groups such as Ni Putes, Ni Soumises (neither whores, nor submissives) which advocates for the protection of immigrant women from violence.

Can the OWS movement similarly galvanize American feminists? Has it done so already? Feminism after all should be viewed as more than tangential to the struggle for economic justice.  As Ms. Blogger Angi Becker Stevens points out, women still earn less on average than men, are more likely to be single parents and are hit hardest by poverty and cuts to family planning services.

Perhaps, at the very least, OWS signals an awakening from a post-September 11 chill that has squelched healthy debate in this country. If so, feminism, along with all movements that thrive on free speech, will benefit.

Feminist poststructuralist scholar Judith Butler, recently gave an address to the protesters in New York City eloquently countering criticisms that the goals of OWS are impractical, or worse, impossible.  She told the crowd, “If hope is an impossible demand, then we demand the impossible.”

Flashback to May ’68 and one of its most provocative and paradoxical slogans: Be realistic. Demand the impossible!