Ms. Goes Back to School - Ms. Magazine
Skip to content 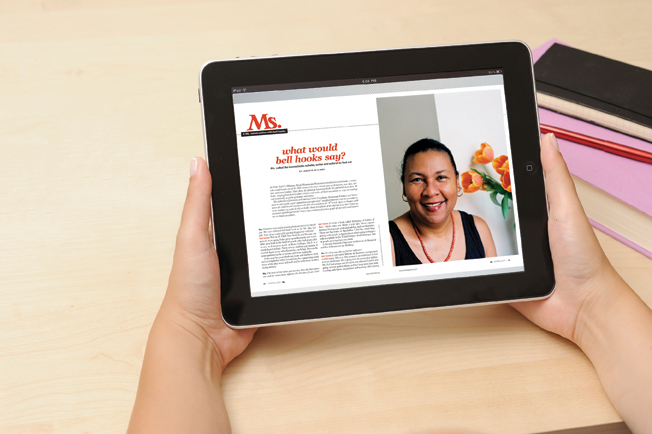 As a women’s studies PH.D.and instructor, here’s the challenge I face in today’s classroom (and one I’m sure many feminist educators encounter daily): How do we engage the next generation of computer-savvy students in feminism and women’s studies?

How do we effectively go where they live: on laptops and tablet computers and smart phones? When we achieve actual encounters, how do we get students excited about the history of social change and how it impacts their personal life journeys? What’s our strategy as teachers to get students to read more, critique more, discuss and apply more—and become more active as both students and feminists?

An answer: We need to speak “digital” to our students. We need to become Web-literate and close to the cutting edge in our technical knowledge. For one thing, online education is growing at a rapid pace, so we are compelled to create and teach more and more courses as hybrid (part classroom, part online) or fully online classes. That changes the notion of the “classroom,” and we have to get ahead of that change.

For another, we can now bring digital material into the physical classroom as well as into our online educational programs. And that’s where Ms. in the Classroom has stepped in.

Ms. magazine has long strived to bring women’s studies scholarship into the magazine, translating sometimes complex jargon into mainstream language. When Ms. is brought into feminist classrooms, it can start discussions with the next generation of feminists right at the moment their consciousness is being raised. And in the new digital format, it takes on an even greater sense of currency.

In my classes, I’ve added it to the curriculum just as easily as I would a new textbook or reader. I integrate Ms. into my lectures and discussions, assignments and tests—both in my online courses and in the “old school” classroom. And it’s not just up-to-the-minute Ms. articles that I can choose from, since Ms. in the Classroom includes a selection of iconic Ms. pieces (“The Best of 30 Years: Reporting, Rebelling & Truth- Telling” and “Best of Ms. Fiction and Poetry”). I’ve loved browsing through classics from the ’70s, ’80s and ’90s, recalling my own feminist light-bulb moments and adding those articles to my classes’ reading lists.

I re-read “In Search of Our Mothers’ Gardens” (1974) by Alice Walker, “If Men Could Menstruate” (1978) by Gloria Steinem and “The Nature of the Beast” (1992) by Anita Hill. Most of my students would not yet be familiar with these articles, and were probably infants during the Anita Hill/Clarence Thomas hearings, but I knew that if they took a close-up look at this archival material, they’d experience their own feminist clicks.

Then onto recent Ms. reporting. The headlines showcase issues facing students today, and many that we fought and championed decades ago as well: abortion, rape, equal rights in the workplace, sexual harassment, sexist and racist advertising, the global assembly line. The whole experience of reading Ms., including its calendar listings, book reviews and even ads for women’s organizations, gives a flavor of the richness of feminist politics, culture and activism.

In the “Women and Leadership” courses I’ve taught at UCLA’s Department of Women’s Studies, I integrate stories of feminist leaders from the pages of Ms. that are rarely found in women’s leadership textbooks or mainstream media. For example, when I teach women’s leadership in politics, I use the Winter 2011 Ms. cover story, “Most Effective. Speaker. Ever,” kicking off the class with this discussion question: “Why do you think Ms. was the only national publication to put Nancy Pelosi on its cover when she became the first woman speaker of the house in 2007?”

I’ve also used digital Ms. as a feminist teaching tool in my online course “Race, Class and Gender in the United States.” I enhance the readings from the required textbook—Paula S. Rothenberg’s Race, Class, and Gender in the United States—with one or two Ms. articles each week. The first week I assigned Bonnie Thornton Dill’s “Intersections” (Spring 2009), which introduces students to the core concept of “intersectionality” and how it shapes personal identity, including their own. Other recent favorites that brought current issues and events to the classroom were the Spring 2011 cover story, “Rape Is Rape,” and the Summer 2011 news piece on Saudi women driving.

For the final class I always assign “Visions for Change” (Winter 2009), in which feminist leaders imagine ways to move forward following the inauguration of President Barack Obama. My final question and assignment for the class is, of course, “What is your vision for social change?”

I’m certainly not the only women’s studies professor using Ms. in the Classroom to generate fruitful conversation in class. Susan Feiner, professor of economics and women’s and gender studies at the University of Southern Maine, used Ms. at the beginning of the fall semester. She reports, “Had a great class today. Lots of discussion. When one of the students gave a summary of the 1973 Ms. article ‘Never Again—Death, Politics and Abortion,’ the classroom full of brand-new college students—ages 18+—were astounded that women [in the U.S.] died from abortions.” Using other Ms. articles, such as “The Right of Every Woman” (Summer 2010) by Belle Taylor McGhee, students can then extend their knowledge about abortion rights globally and learn how women are still dying from botched abortions.

Jennifer Cognard-Black, a women’s and gender studies professor at St. Mary’s College of Maryland, told me that she uses Ms. in the Classroom to stimulate a “global conversation about what feminism is and what it means.” One of her techniques is to have her students examine a single issue of the magazine from cover to cover, from the table of contents through to No Comment.

And Carrie Baker, a women’s studies professor at Smith College, uses stories of women’s activism in Ms. to inspire her own students to action. “The great thing about Ms. magazine is you always learn about activists who are doing something about the problems [we discuss in class],” she says. “So [students] feel inspired and learn that there’s a [feminist] community out there that they can plug in to.”

Beverly Guy-Sheftall, a founding mother of black women’s studies, echoes that sentiment: “Ms. informs my students about what’s going on in the world and encourages them to take action.” This semester she’ll be using Ms. in the Classroom in her team-taught “Introduction to Comparative Women’s Studies” course at Spelman College.

After four decades—yes, Ms. celebrates its 40th anniversary in 2012— of debate and discussion and of thought-provoking feminist writing, Ms. is going back to school.

Karon Jolna, Ph.D., is a scholar-activist with 20 years experience in nonprofit feminist media and higher education. Currently she serves as program director and editor at Ms. magazine, leading its efforts to bring women’s, gender and sexuality studies analyses and voices to a broader national audience. Previously she served as a lecturer at UCLA’s Gender Studies and research scholar at UCLA’s Center for the Study of Women. Jolna was among the first cohort to earn a Ph.D. in women’s studies at Emory University. Canadian-born, Jolna currently lives in Los Angeles.