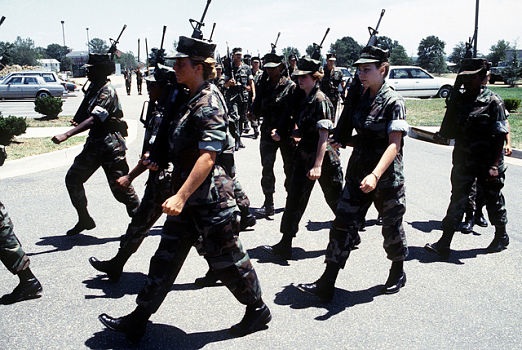 Back in December of last year, a federal judge in Virginia dismissed a landmark case filed by Washington, D.C. attorney Susan Burke in which 28 plaintiffs had alleged that they were sexually assaulted while in the military. But that hasn’t stopped Burke, nor the brave military women who are speaking out, in her quest for justice: Today, she filed a new suit against the Pentagon on behalf of eight former and current women soldiers from the Navy and Marine Corps. The soldiers allege that they were “raped, sexually assaulted or, in one instance, stalked and severely harassed, and suffered retaliation as a result of the reporting.”

Rather than being respected and appreciated for reporting crimes and unprofessional conduct, Plaintiffs and others who report are branded “troublemakers,” endure egregious and blatant retaliation, and are often forced out of military service.

The Pentagon’s Fiscal Year 2010 Annual Report on Sexual Assault in the Military indicated that approximately 3,000 women experienced sexual assault in fiscal year 2008, a 9 percent increase from the previous year, and experts estimate the real rate of sexual assault to be five times higher than reported because most victims fear retaliation if they report. According to a 2003 study by the Veterans Affairs Medical Center, at least one-third of all women veterans experienced rape or sexual assault during their service, primarily from U.S. service personnel.

A January 2012 Army report [PDF] found that in the previous year, a U.S. soldier committed a violent sex crime every six hours and forty minutes. And that soldier is overwhelming likely to be male: Servicewomen are the victims in 95 percent of all sex crimes committed. Women in the armed services are even more vulnerable than women in civilian life: They’re twice as likely to be sexually assaulted, “often by the very men who are supposedly their comrades,” wrote Molly Ginty in the Fall 2011 issue of Ms.

The assault is one thing; the military’s reaction to it can make women soldiers feel doubly victimized. Women who have had the courage to report being sexually assaulted have been ridiculed, demoted, jailed, physically punished and even murdered. In her award-winning Fall 2008 Ms. article, “The Scandal of Military Rape,” author Helen Benedict recounts stories of assaulted-and-murdered military women LaVena Johnson and Maria Lauterbach, whose deaths generated public outrage. Wrote Benedict:

The reality is that the military’s top brass has a dismal record when it comes to stopping the persecution and abuse of its female members. Here are a few examples: Of the sexual assaults reported and recorded by the DOD in fiscal year 2007, half were met with no official action, a third were dismissed as unworthy of investigation and only 8 percent of those investigated were referred to courts-martial. In comparison, 40 percent of those arrested for sex crimes in civilian life are prosecuted. Of those few military men found guilty of rape or sexual assault, the majority received punishments so mild they amounted to slaps on the wrist, conveying the message that men can do what they want to women in the military with little consequence.

Burke told Reuters that the case could go to trial in 18 months–if it survives attempts by the Pentagon to dismiss it. She has also filed an appeal on the previously dismissed case.

The new suit once again shines a light on the crisis of sexual assault against military women–a crisis that some would have the gall to make light of. Not long ago on the Fox News show America’s News Headquarters, conservative pundit Liz Trotta responded to a U.S. Army report noting a 64 percent increase in sexual violence against women in the military since 2006 by saying, “What did they expect? These people are in close contact…” She went on to criticize the Department of Defense for increasing their support of programs for sexual assault victims:

The feminists have also directed them, really, to spend a lot of money. They have sexual counselors all over the place, victims’ advocates, sexual response coordinators. … You have this whole bureaucracy upon bureaucracy being built up with all kinds of levels of people to support women in the military who are now being raped too much.

When Fox News anchor Eric Shawn replied “Many would say that they need to be protected,” Trotta retorted, “That’s funny, I thought the mission of the ‘armed forces’ was to defend and protect us, not the people who were fighting the war.”

Perhaps Trotta has not had the chance to speak with military women who have gone through the nightmare of a sexual assault–such as two of the plaintiffs in the new lawsuit, lieutenants Ariana Klay and Elle Helmer, who spoke today with CNN.

And we’d suggest that Trotta (and everyone else) watch the powerful new documentary about rape in the military, The Invisible War, from filmmakers Kirby Dick and Amy Ziering. Over the next few months, it will be screening at film festivals in Cleveland, Los Angeles, San Francisco, Hawaii and elsewhere.

Francesa Tarant and Michele Kort also contributed to this report.