Future of Feminism: Freedom from Body Shaming, Regardless of Size - Ms. Magazine
Skip to content 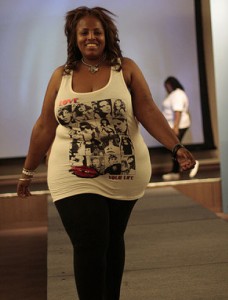 While I’ve already spent some time discussing the dangerous ways the media sexualizes women and girls, and how it gives the false impression that to be attractive, popular and interesting you must be skinny and hyper-feminine, today I want to switch things up little and talk about the body acceptance movement (also called “size acceptance” or “fat acceptance”), which attempts to combat the negative stereotypes around women and men who are conventionally considered overweight or obese.

One thing bears mentioning upfront: Fighting for body acceptance does not mean promoting an unhealthy lifestyle. In fact, according to Linda Bacon’s landmark book, Health at Every Size, and other recent studies, dieting is often ineffective at handling obesity, and sometimes the extreme measures used to combat obesity–surgery, liposuction, aggressive exercise programs–are more harmful than the extra weight. Not to mention that it’s far from true that all thin people are healthy. The myth that skinny equals healthy is rooted in our cultural obsession with weight and the media’s idolization of rail-thin actors and models.

Rebecca Weinstein, founder of the social networking site People of Size and author of the forthcoming Fat Sex: The Naked Truth, believes that public humiliation and “fat shaming” damage people of all shapes, sizes and genders. Nonetheless, she argues, the body acceptance movement is a feminist one:

Not all people [of] size are women. However, size, weight, fat, beauty, and the ways in which our culture deals with those issues, are clearly feminist concerns.

With women told directly by advertisers that we need body-sculpting sneakers, diet yogurt and special soups to get slim physiques and feel good about our bodies and told, more indirectly, by TV that “chubsters” and other supposedly “unattractive” women won’t get dates, the body acceptance movement is indeed an issue for all women, regardless of size.

According to Kate Harding, co-author of Lessons from the Fat-O-Sphere: Quit Dieting and Declare a Truce with Your Body, and founder of the incredibly popular but now defunct feminist blog Shapely Prose, it’s untenable that fat people are still publicly criticized “even in some progressive circles, which are usually known for not hating entire groups of people because of their appearances, not thinking what other people do with their bodies is anybody’s beeswax, and not uncritically accepting whatever moral panic the media tries to whip up.”

Fortunately, the fat-acceptance movement is strong and growing every day, from targeted campaigns to a plethora of great blogs, communities and other resources including the National Association to Advance Fat Acceptance, the Association for Size Diversity and Health, First, Do No Harm, the Big Fat Blog, Fat!So?, Notes from the Fatosphere, and many others.

Part Eighteen in a Women’s History Month series celebrating organizations and ideas that represent the future of feminism.

Photo of a model in a plus-size fashion show from Flickr user Parker Michael Knight via Creative Commons 3.0.