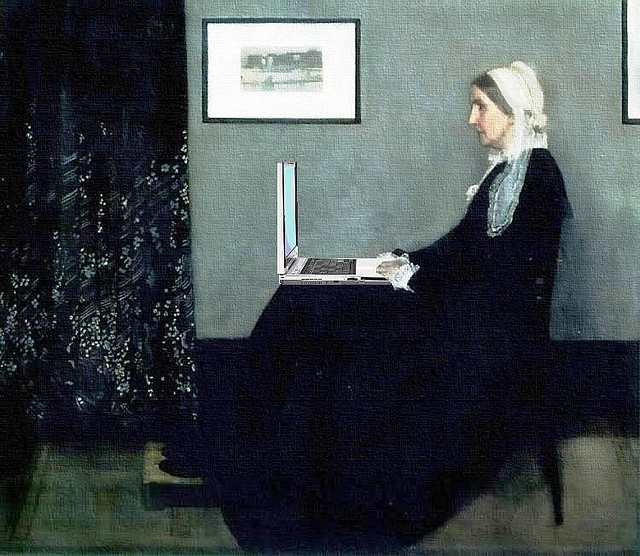 Last month I wrote a quick overview of feminist parenting bloggers for Ms.‘s “Future of Feminism” series. The huge response I received spurred me to launch “The Femisphere,” a virtual tour of the feminist blogosphere’s overlooked corners. So it feels quite fitting to begin my series with an in-depth look at mothering bloggers.

If I had my druthers, I would have found a way to assemble these mamas all together in one room, perhaps with a fully stocked bar. Reality, however, dictated that we carry out our conversation via the Internet–and voila, below is our roundtable discussion of feminist blogging while mothering!

Femisphere: How did you find yourself blogging about motherhood and feminism?

Andie: I was at home with my first baby and feeling very lost. I couldn’t find a version of motherhood that really fit with me, so I was looking for some ‘mother friends’ who were like me. I suddenly realized that one way to find my way through was to write about it. So I did, but I was terribly shy at first and didn’t start blogging until I had been keeping a paper journal for almost a year, until I felt like I had something of a rhythm going.

Over time I came to realize that much of what was challenging me about motherhood was in some way related to my feminism (eg. the sexism of children’s toys, clothing and behavior; the implied competition between women inherent in “the mummy wars,” etc.) Many of my breakthrough moments as a parent have come through feminism and being around other feminists.

Liz: As a teen birth mother and then as a young mother again at 21, I lacked a connection with my peers and other mothers. I felt too young, too poor, too different.

I always self-identified as a feminist and was finishing my degree in English Literature and women’s studies. But in everyday life that didn’t help. In fact, it only made it worse. Where was I among all the sanitized stories and memoirs about motherhood?

I remember breaking down in tears in a women’s studies class over a theory that escapes me now. I told my fellow students how feminist theory may be marginally easy to read and write, but in practice I couldn’t handle it: division of labor, sleepless nights, child care limitations, dismantling the Master’s House, all of it. I implored them to see that motherhood was not easy and that I was, most definitely, losing my mind.

Somehow, I came across a zine called Mamaphiles that featured women like me. It changed me. Changed my motherhood, my writing, my life. Through Mamaphiles, I discovered doulas and poor mothers and women of color and co-parents and gay couples and pink-haired mothers–it ran the gamut.

I was never one to keep a diary or journal, but the raw stories in the zine led me to find power in acceptance and sharing your story. The women I found through blogging encouraged me to press on through their support. Even now, after many different platforms, we’re still connected.

Veronica: I began blogging about feminism in the dark, dark ages of 2000. So when I became pregnant in late 2002, it just made sense to blog about my pregnancy. But I find myself continually rebelling against the stereotypical mom blog. I want to put the grit back into mothering. I like to talk honestly about the trials of raising a human being, especially a girl, in today’s world. If that means I’m a feminist mom blogger, so be it.

Lyla: I just started my blog in January. I totally relate to what Andie said about trying to find the version of motherhood that fit me.  It felt to me like culturally a lot of becoming a mother was erasing oneself.

I have always been a feminist, but wow, becoming a mother made it feel like I needed it to save my soul!  I felt a lot more oppressed in certain ways. Being a graduate student in an egalitarian marriage, living in a progressive part of the country, I always felt fairly validated in my feminist identity and valued for many things I had to offer. I would say I’ve been fairly privileged.

But as a mother, I suddenly felt closeted, like a spy in a strange land–hence my blog’s “undercover” theme. When I was around other moms it felt like there was no room for aspects of self that didn’t relate to motherhood–as though that would call into question my devotion to my children or something. I felt like my feminism, my egalitarian relationship, my pansexuality, my career ambition and certainly any negative feelings about motherhood had to be kept under wraps.

Where do you see yourselves fitting within the feminist blogosphere?

Veronica: Since I began my blogging life pre-mamahood, I think of myself as a feminist blogger who had a kid. But a lot of people who didn’t know me before, they hear “feminist mom blogger” and seem to focus on the “mom” part and dismiss me as a serious blogger.

Andie: I think, as feminist parents we’re standing right in the middle of very contested territory for feminism. No wonder we feel a little left out. The movement has spent much of the last half decade fighting for women to be able to leave the home, to choose roles outside of the home, to be visible and valued when they choose not to have children. All of that is a serious battle, and seriously unfinished, but where does that leave women who want to be mothers and love mothering, what about the women who are fighting for their right to motherhood to be respected (poor women, women with disabilities, Indigenous women)?

Veronica: Fab insight! I have a good number of kid-free friends–feminists who will never have kids but adore my daughter. In many ways I think my daughter is the luckiest kid, because she has so many super cool child-free adults who adore her. That divide between me and my kid-free friends has turned out to be a strength in our relationships instead of a liability. I’m grateful they didn’t run away when I had my daughter, and I’m sure they are grateful I didn’t totally lose myself to motherhood.

Andie: I am now convinced that feminists want very much to read about how other feminists are living their lives. We don’t have a lot of role models; we don’t have a lot of traditions to follow. There is a huge curiosity there. How you arrange your life? Where do you feel compromised? What do you fight about with your partner and how do you resolve it? What you are lying in bed at night stewing over at 3 a.m.? A good feminist blogger has a lot of answers to offer.

wood turtle: While I started the blog as motherhood-meets-feminism, it has also morphed into a platform for my Muslim feminism. I have a bifurcated audience: Some readers want to know how I’m balancing my feminism with parenting based on Islamic principles; others want my overall thoughts on religion and feminism, and are indifferent to my food splatter references and co-sleeping conundrums.

Lyla: Since I’m so new to blogging, I don’t have a great sense of the dynamics between mommy and feminist bloggers and how one negotiates the overlap. I do, however, have a good sense of how hard straddling those two identities can be within me as a woman.

I thought what Andie said about the desire to see feminist lives as models might be part of the appeal of all our blogs. I feel like I’m struggling to inhabit a mother space, a feminist space, a queer space, and many other spaces simultaneously in a culture that strives to boil us down to the simplest, narrowest version of ourselves.

Not so surprisingly, this is only a sampling of what these fabulous bloggers had to say. To read more from our conversation, please head on over to The Mamafesto.