It's Not a "Mommy War"—It's A War On Moms - Ms. Magazine
Skip to content 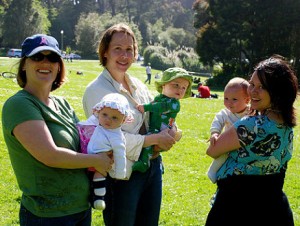 There is no question that Hilary Rosen should have chosen her words more carefully when she said that Ann Romney, mother of five sons, “never worked a day in her life.” Raising children is work. It’s immensely rewarding work, but it’s work just the same. Ann Romney is justifiably proud of the work she’s done raising her children.

Now that the spotlight is on motherhood, rather than fanning the false flames of a “Mommy War” that doesn’t really exist, it’s time that we as a nation recognize that regardless of whether or not mothers’ work is paid or unpaid, the work of caregiving is important to us all and should be valued.

But too often it’s not.

We see this devaluation happen over and over again. From Rush Limbaugh falsely attributing gender pay gaps to maternity leave, to sensationalized headlines where a mother of five is dismissed as having “never worked a day in her life,” to the all too common experience of wage and hiring discrimination against mothers, the devaluation of mothers is at a crisis point in our nation.

Every day, moms around the world are doing the hard work of raising children. This unpaid work involves making sure that children get the nutrition, care, education, and health care they need to grow up to be healthy, thriving adults who are part of our nation’s economic success. In fact, there is an enormous amount of untracked, unpaid labor done by women that’s fueling our economy. According to a 1995 U.N. Human Development Report, “If more human activities were treated as market transactions at the prevailing wages, they would yield huge monetary valuations–a staggering $16 trillion… Of this $16 trillion, $11 trillion is the non-monetized, ‘invisible’ contribution of women.” The work of moms–both of moms who are in the labor force and those who are not–is significant.

It’s an understatement to say that this unpaid work is much easier to do when families are economically secure.

That’s why it’s so important that when the mom rhetoric starts flying, and everyone starts grandstanding about how much they value moms, we also must talk about how important it is to advance public policies that allow all families to thrive.

Ann Romney had the financial resources she needed to be able to decide to stay home to raise her children while remaining fiscally solvent. This isn’t always possible. In fact, families with a stay-at-home parent are seven times more likely to live in poverty, and millions of moms don’t have the option to choose to stay at home because their wages are needed to put food on the table and a roof over the heads of their families. With the cost of raising a child to age 18 (not including college) these days at over $200,000 per child, mothers’ wages are increasingly needed to make ends meet.

Ultimately, whether mothers’ work is paid or unpaid, all moms are concerned about their families’ well-being and economic security. That’s why we need strong policies that reflect the composition of our nation’s modern labor force, and that reduce discrimination against mothers and women. With women comprising 50 percent of the modern labor force for the first time in history, with a majority of moms now in the labor force, and with many families requiring the wages of moms to stay solvent, it’s critical that family economic security policies that most other nations take as a given now move forward quickly:

Without family economic security policies like these in place, and with the pervasive discrimination against moms, families are struggling. This has rippling repercussions on our children, with nearly 1 in 4 children in our nation experiencing food scarcity due to family economic limitations. This lack of policies and ongoing discrimination also has repercussions on moms and entire families. For example, right now, having a new baby is a leading cause of poverty spells in this country, and nearly a quarter of young families live in poverty.

It’s not a “Mommy War” between paid and unpaid moms; it’s a War on Moms.

It shouldn’t be this way.

Mothers and families should be able to work hard and get what they need — a good job, food on the table, good health care, and a safe place to call home.

To be frank, children are not only our hearts, they are the economic engine of our nation’s future. And when we devalue the paid and unpaid work of moms, we devalue our future.

Let’s take this moment when the eyes of our nation are focused on moms to recognize the value of all moms’ paid and unpaid work–and to urge our elected leaders to support policies that allow both our families and our economy to thrive.

Let’s end the War on Moms and stop adding fuel to fire the fake, and divisive, “Mommy Wars” between moms who are in the labor force and moms who are not; and instead come together to stop the discrimination against all moms, both paid and unpaid.

After all, the success of our families and our economy are intertwined.

Kristin Rowe-Finkbeiner is the author of Keep Marching and Executive Director and CEO of MomsRising—an on-the-ground and online grassroots organization of more than a million people who are working to increase family economic security, decrease discrimination against women and moms and build a nation where businesses and families can thrive.

Forcing Thousands of Teens to Parent in a Post-Roe Nation