The Anti-Abortion Game of Life - Ms. Magazine
Skip to content 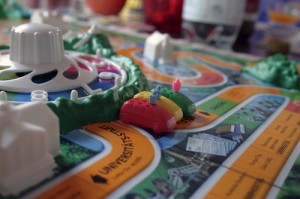 To bring down the high chlamydia infections rate among Tennessee teenagers, an anti-abortion pregnancy center in Athens, Tenn., has proposed spending federal tax dollars on a life-sized version of the Game of Life.

The “Teen Life Maze” is just one of the ideas put forth by a cluster of crisis pregnancy centers that are receiving government grants to conduct abstinence education as part of President Obama’s health-care reform law.

Records obtained by The American Independent show that the government is paying for abstinence programs run by centers that promote dubious medical information. For example, crisis pregnancy centers (CPCs) receiving funding through the program claim that “reliable studies” have shown a link between abortion and breast cancer.

One of the centers says it seeks to help students understand “the lack of effectiveness of condoms/birth control in STD protection and pregnancy.”

TAI previously reported that a South Dakota anti-abortion CPC that requires its volunteers to be Christians received funding under a program created by Obama’s stimulus bill.

Between 1996 and 2009, taxpayers spent more than $1.5 billion on abstinence-only education, paid for by federal grants and state matching funds, according to the Sexuality Information and Education Council of the United States. In 2004, Rep. Henry Waxman (D-Calif.) released a report that found that these programs often contained false or distorted information about sex and reproductive health, such as claiming that condoms have a high failure rate at preventing HIV and pregnancy, women who have abortions have a high risk of becoming sterile, and HIV can be transmitted through sweat and tears.

Shortly after taking office, Obama moved to cut off federal funding for most abstinence-only education.

However, during the intense negotiations over the health-care-reform bill in 2009 and 2010, Congress attached a $250 million grant program for abstinence-only instruction (granting up to $50 million annually, through 2014). Under the program, state health departments apply for abstinence funding and can then allocate sub-awards to various organizations across the state, including county health departments, schools, community groups, and faith-based nonprofits.

So far, at least three anti-abortion CPCs have received funding through this provision. They’re all in Tennessee, which has the nation’s 11th highest teen birth rate, according to new data from the Centers for Disease Control and Prevention.

In January, the Tennessee Department of Health announced it was dividing $3.2 million in abstinence funding among 13 agencies through 2014 to “support comprehensive, evidence-based and medically accurate community-based education programs.”

A total of about $650,000 of that money was awarded to the three CPCs: Full Circle Women’s Services in Athens, Life Choices Pregnancy Support Center in Dyersburg, and Women’s Care Center of Rhea County, Inc., in Dayton. Per the terms of the grant program, each grant recipient has to match 75 percent of the award.

When they’re not teaching teens not to have sex, these centers are seeing women – sometimes teens – facing unplanned, and often unwelcomed, pregnancies. They seek to discourage abortion, offering women various services including counseling and free pregnancy tests. The websites of two of the centers – Full Circle Women’s Services and Life Choices Pregnancy Support Center – feature an array of misinformation about abortion, including claims that abortion causes breast cancer  and depression.

Despite widespread rejection of an abortion-breast cancer link from major medical institutions such as the American Cancer Society, the American Congress of Obstetricians and Gynecologists, and the National Cancer Institute, these CPCs imply that there is a connection, claiming on their websites that “a number of reliable studies have demonstrated connection between abortion and later development of breast cancer.”

According to the American Cancer Society, “At this time, the scientific evidence does not support the notion that abortion of any kind raises the risk of breast cancer or any other type of cancer.”

Both Full Circle Women’s Services and the Women’s Care Center are affiliated with Care Net, a national network of crisis pregnancy centers that prohibits its members from recommending, offering or referring “single women” for contraception.

Whereas proponents of comprehensive sex education encourage teaching teens how to protect themselves against unplanned pregnancy and diseases while acknowledging that condoms are not guaranteed to work 100 percent of the time, abstinence-education advocates often claim that teaching about proper condom use offers young people a “false sense of security.”

On their websites, Full Circle, Life Choices Pregnancy Resource Center, and the Women’s Care Center cite identical statistics emphasizing what they portray as the lack of effectiveness of condoms. These centers tell readers that “consistent” condom use during vaginal sex reduces the risk of “HIV by 85%”; human papillomavirus “by 50% or less”; and gonorrhea, Chlamydia, herpes, and syphilis “by about 50%.” The statistics come from various studies compiled by the Medical Institute, a nonprofit organization whose advice for preventing STDs is: “Avoid sexual activity if you are single. Be faithful to one uninfected partner for the rest of your life.”

Richard A. Crosby, a professor and chair at the Department of Health Behavior at the University of Kentucky College of Public Health, told TAI that these statistics are misleading.

“All of these numbers are way low,” Crosby said, referring to the pregnancy centers’ statistics (with the exception of the rate of condom-use effectiveness at preventing HPV, which he said is supported by studies). He said the claim that condoms are 85 percent effective in reducing HIV infection is “really misleading” and not supported by many research studies that isolate for consistent and correct use.

Excerpted with permission from The American Independent. Read the full story here.