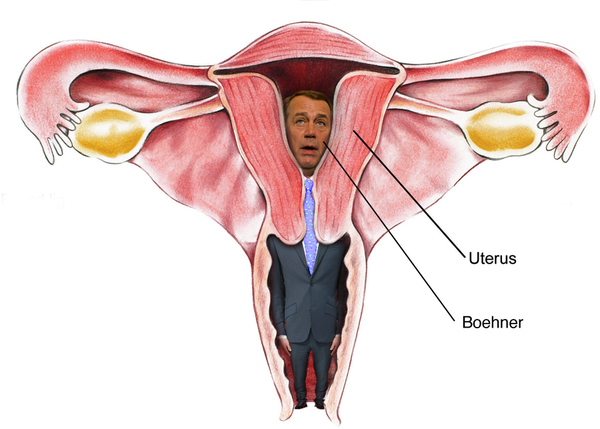 Sites such as RH Reality Check and Abortion Gang have long comprised a thriving reproductive-rights blogosphere. In the past year, their numbers have swelled, as legions of pissed-off feminists take to the Internet to oppose the growing war on women’s reproductive rights.

One of the new kids on the repro-rights block is Keep your Boehner out of my Uterus, which started in early 2011 as an anonymous Tumblr in response to increasing anti-choice legislation and quickly amassed a following of thousands. After being interviewed for an article for Salon.com, Jessica Luther, the woman behind this fierce and furious Tumblr, has made her identity known and is ready to talk openly about her salvo against the War on Women and what she has learned along the way.

Ms. Blog: Why did you start Keep your Boehner out of my Uterus?

Jessica Luther: I started KYBOOMU back in February 2011 a couple of days after attending my first reproductive rights rally, The Walk for Choice. While there, my friend snapped a pic of someone holding a sign with those words. We laughed about how clever it was. And then over the next couple of days, both with friends here in Austin and in the community on [feminist blog] Shakesville, I joked about making a meme with Boehner and him saying all the things that anti-choicers actually believe.

I got incredibly encouragement from Shakesville commenters and so, having heard a bit about Tumblr, began my Boehner memes.

I thought it would simply stay memes and would fizzle out. But then the Pence Amendment came quickly to the fore, and here in Texas they were passing the forced ultrasound law, and I found myself starting to blog more generally about reproductive rights. And I haven’t gone back.

What has been the reception of the Tumblr so far?

Good, overall. The memes were really popular. The picture of Boehner inside the uterus (which two of my good friends made for me) has been reblogged thousands of times. My follower count continues to increase.

While I have received my fair share anti-choice hate mail (I allow people to send me anonymous messages), the largest area of contention on my blog has been the language I use to talk about the people involved in the reproductive rights movement. Tumblr is an interesting space in which to blog and I wasn’t quite prepared for it. When you blog something, it is very easy for someone else to reblog it. Things can move very quickly. I learned fast that the language I was using to discuss the battle over reproductive rights was not inclusive for people other than cis women. People would reblog things I wrote with commentary saying I was transphobic, that I was erasing trans* people from the reality of the reproductive rights struggle, that I just didn’t care. And I will admit–have admitted multiple times on KYBOOMU–that until I got onto Tumblr, I had never even considered how the language of the movement works to create insider/outsider groups, even if the laws and culture we are fighting have an impact on more than just cis women.

Over time, my language has evolved. Most of the time it is just me writing a note at the end of a blog post (either reblogging someone else’s commentary or linking to a post on another website) that reads “NB: More people than just cis women are affected by these laws.” Something simple.

I have had MAJOR arguments with other pro-choice advocates over my desire to be inclusive. I used to lose 20 followers whenever I would fight for inclusivity. That doesn’t really happen anymore. I have had many trans* people thank me for the inclusivity, though I don’t feel that I should be thanked. It should just be how we talk about reproductive rights. I have had other people tell me that they themselves try to be more inclusive now (including John Darnielle, lead singer of The Mountain Goats, who follows KYBOOMU on Twitter and actually reads the things I write).

What’s your take on how both mainstream media and feminist media tackle issues such as reproductive rights?

I think one of the things we can do and are doing and need to keep doing is simply inform people of the many different anti-choice laws that are getting proposed (some passed, some not) in the different states. One of the hardest things about reproductive rights is that it is often, especially now, fought at the state level. And even in your own state, it can be hard to keep track.

The media can serve to remind people–over and over again if necessary–of how many laws there are, the many different shapes they take, the beliefs of their sponsors, etc. It can help people to engage them on the local level, which is SORELY needed right now. Yes, national politics matter, but when it comes to reproductive rights the true battles are playing out in our backyards, and most people don’t know about their local battles until it is too late.

This list is only a sampling of the many fabulous folks who write about reproductive rights online. Please feel free to add your own in the comments!

Photo illustration by Cory Tobin, courtesy of the Keep your Boehner out of my Uterus Tumblr.