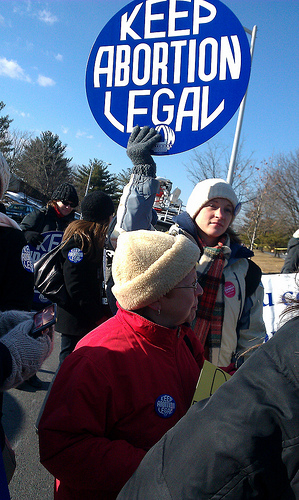 Conservative legislators in Iowa are willing to give up millions of dollars in Medicaid funding in order to block state-funded abortions in the case of rape, incest or if the fetus is physically or mentally deformed.

A coalition made up of 41 Iowa Republican representatives filed a petition on June 12 to immediately stop such abortions from receiving government funding. It’s just the latest action in a long list of recent attempts to curb women’s rights in the state. Last month, for example, Iowa Gov. Terry Branstad appointed a Des Moines Catholic priest to the state’s Board of Medicine who opposes abortion rights and the Affordable Care Act’s mandate to provide contraceptive coverage.

“They are clearly interested in taking away the health-care choices of low-income Iowa women,” said Sen. Joe Bolkcom (D-Iowa City), who serves on the Health and Human Services Budget Subcommittee.

The move isn’t just an affront on women’s rights in Iowa–it may be against federal law.

Under the Hyde Amendment, states can deny abortions except if the pregnancy resulted from rape or incest, or if the mother’s life is endangered. Those pushing to end abortion funding in such cases are blatantly disregarding Hyde, so if the petition succeeds it would jeopardize several billion dollars worth of Iowa’s federal Medicaid funds.

“Those are funds that protect the most vulnerable Iowans,” said Bolkcom. That includes everyone reliant on Medicaid–low-income seniors, disabled people, children, parents, pregnant women, women who need treatment for breast or cervical cancer–who would all be hurt by the loss of funding.

The Iowa Department of Health and Human Services has until August 10 to take action on the petition.

This rush to block Medicaid funding reproductive health care is the latest action in a long list of recent attempts to curb women’s rights in the state. Last month, for example, Iowa Gov. Terry Branstad, who holds an anti-choice record, appointed a Des Moines Catholic priest to the state’s Board of Medicine. The priest, Monsignor Frank Bognanno, is a staunch opponent of abortion and the Affordable Care Act’s no co-pay contraception mandate.