On Grunting in Women's Tennis - Ms. Magazine
Skip to content 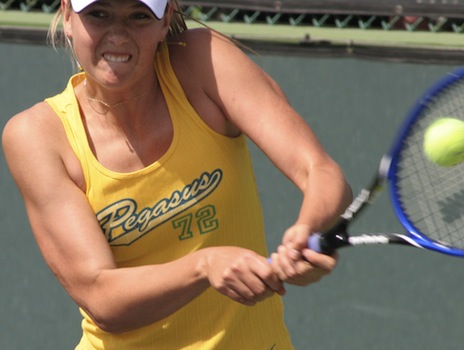 Tennis is not a silent sport. Anyone who tells you otherwise has never witnessed tense moments in a game between, say, top-ranked player Maria Sharapova and champion Serena Williams. Or listened to Victoria Azarenka or Michelle Larcher de Brito play.

Sharapova’s hallmark screams have been clocked at 102.7 decibels. The loudest women’s tennis grunt on record can also be credited to Sharapova, who hit 105 decibles in a 2009 match–just 10 decibles below a lion’s roar. Sharapova puts it simply: “I cannot change [the grunting], that’s what helps me play. I have to keep going with the thing that helps me play.”

But now a muzzle may be clamped on some of the most powerful women in the game. The Women’s Tennis Association (WTA) plans to make a concerted effort to regulate “excessive” grunting. The governing body describes grunting as  distracting and implies that the noise is a tactical move used to put off opponents rather than a natural release of pent-up energy.

Ian Ritchie, chief executive of The All England Lawn Tennis & Croquet Club, which hosts the prestigious Wimbledon tournament, said that a reduction in the amount of grunting would be “helpful” and that he “would prefer to see less.” But the policy will not affect the vociferous men of tennis, some of whom, such as Rafael Nadal and Novak Djokovic, are world-class grunters in their own right.

If the WTA is invested in reaching a nonpareil level of tennis, why handicap its best competitors? Recent research has vindicating grunting as a means to achieving better play. Famed grunter (and superior player) Monica Seles remembers forcing herself to remain silent during the Wimbledon final due to criticism from the London tabloids, describing the experience as “one of the only things I’ve regretted in my life.” She lost 6-2, 6-1. When she resumed her vocal volleying, she won the 1992 U.S. Open.

Of course any number of sporting events feature distractions. What would you call the Laker Girls? Those heinous noisemakers at the World Cup in 2010? Corporate advertising (“sponsorship“) during NASCAR races? All these annoyances target fans–not players–yet are considered tolerable. Yet the WTA in January said that its regulation of noise-levels might assuage the complaints of “some fans [who] find it bothersome.”

The WTA plans to use a hand-held device for umpires to measure sound levels on the court, set a standard for the top noise level that can be reached during a match and, most upsettingly, “educate” young women at tennis academies and development programs on how to control their volume.

Though the limitations will not be implemented with this generation of women’s tennis luminaries, up-and-coming players may be required to reduce their vocalizing to ladylike peeps.

And if men still let loose? Apparently that’s their prerogative.