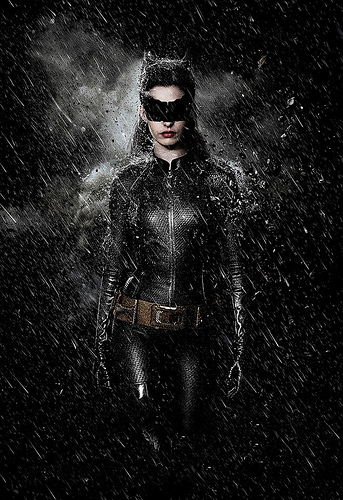 The tragedy in Aurora, Colo., is on all of our minds as our reviewer casts a feminist lens on the latest Batman film. Our hearts go out to the wounded and to the family and friends of those murdered in yet another horrifying incident of gun violence. …

Most reviews of The Dark Knight Rises center on Batman/Bruce Wayne (Christian Bale) and Bane (Tom Hardy), much like the film itself does. This viewer would have preferred if far more of the nearly three-hour film had focused on Catwoman/Selina Kyle (Anne Hathaway), especially given that Hathaway breathes life into this complex character in an intelligent, edgy, strong and refreshingly nonsexualized way.

Sure, she is in a skin-tight black costume, but she is neither the hypersexualized Catwoman played by Halle Berry nor the semi-crazed whip-carrying feline embodied by Michelle Pfeiffer. If anything, she is most like Julie Newmar’s interpretation from the 1960s TV show, with the same traits that Newmar defined as integral to the role: “determined, calculating, wise.” While the Catwoman film was an enormous flop, and deservedly so, Catwoman has had various iterations that present her as more of a complex feminist heroine/femme fatale than a bootylicious sex kitten. Says Suzanne Colon, author of Catwoman: The Life and Times of a Feline Fatale:

This was one of the first female characters we saw on television that really spoke to empowerment. Not only empowerment; a proto-feminism that was very sexy and pretty and female, and yet very take-charge.

Though the comic books have often presented her in a hypersexualized way, Catwoman certainly has much feminist potential. Comic Book Grrrl agrees, noting that “Selina’s journey over the years can in many ways be compared to the growing feminism movement itself.”

Charting Catwoman’s progression, and sometimes regression, Grrrl’s post offers a thoughtful analysis of the character as caged within a patriarchal comics industry that speaks to “the male dominated society we live in as a whole.” She argues that “Catwoman’s great strength is her body and the effect it has on others … the power relies not within Catwoman but on the weakness (lust) of the men around her.” Grrrl also asserts that Catwoman “can only ever operate within the passive female archetype,” but in the new film she is not passive–far from it.

She is also not a neurotic, crazy, impulsive kitty, but a cool, calculating cat. As one of the earliest female comic book heroes, pre-dating Wonder Woman, her cat-like origins were inspired by creator Bob Kane,who explains:

I felt that women were feline creatures and men were more like dogs … cats are as hard to understand as women are. … You always need to keep women at arm’s length.

Kane’s suggestion that women are only good for romance/sex was a view held not only by the villainous males of  Tim Burton’s Batman Returns (most notably by Selena’s murderous boss, Max Shrek) but also by Batman himself. After Batman removes his mask and asks Catwoman/Selina to go home with him at the end of that film, she replied,

Bruce, I would love to live with you in your castle forever just like in a fairytale. … I just couldn’t live with myself, so don’t pretend this is a happy ending.

To the film’s credit, her takedown of the fairytale notion is in keeping with what this post argues is Catwoman’s “anti-patriarchal revenge narrative.” Yet, the film ultimately makes Catwoman more crazy villain than empowered feminist–perhaps no more so than when she saves a woman from being mugged only to chastise her,  “You make it so easy don’t you, always waiting for some Batman to save you. I am Catwoman, hear me roar.”In contrast, in Dark Knight Rises, Catwoman, as Gloria Steinem puts it, “is a feminist superhero with a story line and transformation of her own–plus class consciousness, a girl buddy, equal skills with the Batman equipment and an apartment of her own.”

In regards to class consciousness, Catwoman’s rob-from-the-rich-to-help-the-poor Robin Hood-esque roots are highlighted in the film, first when she absconds with a valuable pearl necklace in typical cat-burglary fashion, but more critically when she tells Bruce Wayne,

There’s a storm coming, Mr. Wayne. You and your friends better batten down the hatches, because when it hits you’re all gonna wonder how you ever thought you could live so large and leave so little for the rest of us.

Here, the film can be read as framing Wayne as a member of the one percent, with Catwoman a valiant defender of the other 99.

In addition to enacting what she sees as justified larceny, Catwoman is more generally the kickass female heroine, as when a male baddy leers at her heels, “Do they make it difficult to walk?” and she responds by slicing them through his leg and responding, “I don’t know–do they?” Not that I am suggesting high-heel violence as the answer to lechery, but this was the best bit of female shoe violence since Jennifer Jason Leigh got murderous with a stiletto in Single White Female.

As an added bonus, Catwoman has a female sidekick in the new film, inspiring some reviewers to read her as a lesbian (as here). Since the comic books depict her as a very sensual, polyamorous character, reading her as queer doesn’t stray all that for from the lore. Given Anne Hathaway’s well-documented support of LGBTQ rights, who knows, maybe next time around we might get to see her version of the character locking lips with Poison Ivy or Batgirl.

Alas, in The Dark Knight Rises (SPOILER ALERT!) Catwoman eventually expresses a romantic interest in Batman by initiating a you-go-girl kiss near the end of the film, and the closing sequence suggests Bat and Cat may just live happily ever after. Ultimately though, and to this feminist’s glee, the movie does not emphasize her as a sex kitten or love interest so much as equally powerful to Batman. Sadly, the other lead female, Miranda Tate (Marion Cotillard)  gets very little screen time. However, to the film’s credit, her character is not sexually objectified either, and her backstory has a refreshing gender-bending twist.

The film also offers some nice critiques of the tough macho guise. Bruce Wayne’s body is in very bad shape at the outset of the film, suggesting that living up to the body ideal of the “heroic male” is far from easy. Even the arch villain of the film, Bane, can be read as corporeally vulnerable, given that his mask is the necessary supplier of essential pain-killing gas after he receives a horrendous injury.

Though the film is somewhat hard to follow for those not aware of the comic books and the characters’ backstories, and though it has some rather slow sections in its long narrative arc, its delivery of a Catwoman feminists can finally cheer for is worth a gander. Thankfully, this latest version of our beloved Ms. Feline still holds true to her strong, don’t-you-dare-objectify-me-ways encompassed in the first thing she ever said to Bruce Wayne, “Let go of me or I’ll claw your eyes out.”  Even better, the film’s Bruce is far from the type to answer, “Careful, claws in or papa spank,’” as he did in the 1940 comic. Instead, he loans her his Batcycle and happily lets her save Gotham right along with him.

Photo of Anne Hathaway as Catwoman in The Dark Knight Rises by marvelousRoland via Creative Commons 3.0