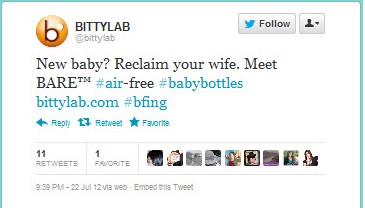 If your wife is breastfeeding your newborn, you need to GET HER BACK.

So instructs an ad campaign for a baby bottle manufacturer, ostensibly targeted to new fathers, which hearkens back to the days when men could count women among their possessions. Bittylab, a company helmed by a woman, tells men to “reclaim” their wives from greedy newborns, tweeting that message (at left) Sunday night.

Just in case you missed it the first time, Bittylab tweeted it again to clarify that fathers compete with newborns for their wives’ attention. Its baby bottle, a “mom-invented product” designed to more closely mimic a breast, relinquishes your wife from caring for that nagging newborn. Never mind that your baby can’t bottle feed on its own and you won’t be able to reclaim your wife quite yet. Her breasts, though, will be all yours!

Moms, dads and other offended parties took to Twitter and Facebook in outrage. One man tweeted indignantly:

I had no urge to ‘reclaim’ my wife from my child, because a) I am a grown up and b) I did not ‘claim’ her in the first place.

The tweets have since been deleted and Bittylab issued an apology so misguided it’s a wonder anyone’s backed off:

Ladies, We’re really sorry about the Twitter campaign run last week. It was a huge miss understood [sic] and resulted in offensive messages. It was taken down yesterday. The messages had nothing to do with putting a husband needs before the baby’s needs, it was more about having a little extra time for the rest of the family. Obviously the whole campaign was poorly executed. We apologize deeply for this miss understanding and assure you, from now on the campaigns will be closely monitored before they go out. Thank you for a second chance.

When wives aren’t feeding their child, they shouldn’t be expected to be “reclaimed” by their husbands. Women aren’t property waiting around to be used by babies, husbands or anyone else.