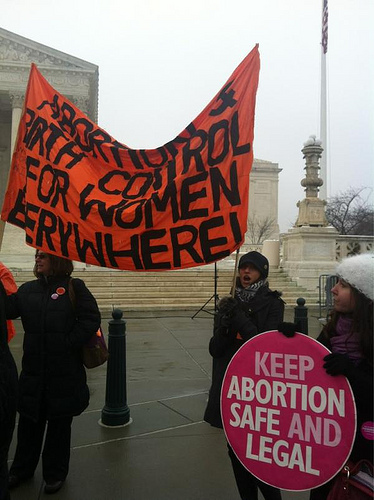 A bill banning certain abortions in the District of Columbia failed in the U.S. House of Representatives yesterday, marking an important victory for women’s reproductive health in a time when those rights are being jeopardized in many states.

The bill–dramatically named the “District of Columbia Pain-Capable Unborn Protection Act,” would have banned abortions in D.C. after 20 weeks of pregnancy, based on the scientifically contested argument that fetuses can feel pain after the 20-week stage. Nine states have passed similar laws banning late-term abortions.

Championed by Rep. Trent Franks (R- Ariz.), the restrictive legislation would have only applied to women in the District–although none of those women, nor any of their representatives, got a say in it.

Because Congress has the power to legislate for the District, with certain restrictions, Del. Eleanor Holmes Norton (D-D.C.) and other D.C. politicians denounced the bill for attempting to subvert their independence and use women in the District as guinea pigs for a possible federal law.

Norton represents D.C. in Congress but is not allowed to vote. She pointed out that the bill is doubly offensive to women as an attack on both reproductive rights and the District’s sovereignty, the Washington Post reported:

‘The folks behind this bill care nothing about the District of Columbia,’ she said. ‘They have picked on the District to get a phony federal imprimatur on a bill that targets Roe v. Wade.’

Meanwhile, in Franks’ home state of Arizona, a chaotic turn of events upended the most restrictive anti-abortion law in the country, set to go into effect Thursday. The law, signed by anti-choice Gov. Jan Brewer in April, was upheld by a U.S. District judge Monday, but an emergency appeal, filed jointly by the American Civil Liberties Union and the Center for Reproductive Rights, succeeded in stopping its enforcement until a federal court can review it later this year.