Thumbs Up, Thumbs Down: A Feminist Look at the Olympics (So Far) - Ms. Magazine
Skip to content 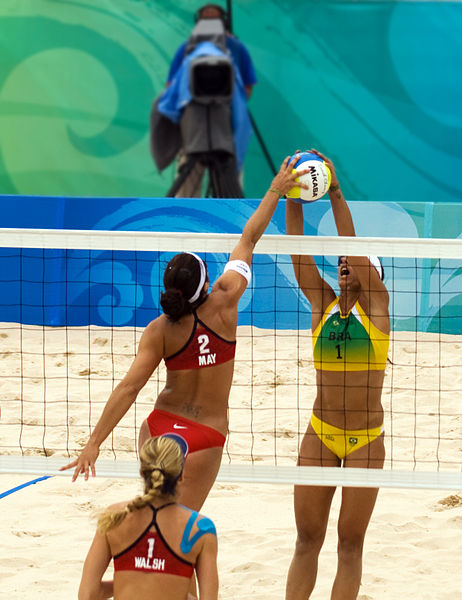 With all of the TV coverage, print and digital news, Facebook updates, Twitter hashtags and blog posts about what’s happening in London, we’ve gathered our favorite (and not so favorite) feminist moments and commentaries from the 2012 Summer Games. Please share your thoughts in the comments below!

for British weightlifter Zoe Smith, who spoke out in a blog post against sexist criticism that she and her teammates shouldn’t have big muscles because they’re women. Here are a few of her best quotes:

The obvious choice of slander when talking about female weightlifting is ‘how unfeminine, girls shouldn’t be strong or have muscles, this is wrong’. And maybe they’re right … in the Victorian era. To think people still think like this is laughable, we’re in 2012!

What makes them think that we even WANT them to find us attractive?

[One man who made a hateful remark] came up with the original comeback that I should get back in the kitchen. I laughed.

For the record number of openly gay and lesbian athletes at the Olympics! Karen Hultzer’s self-outing brings the number to 22, twice as many as the 11 in Athens and the 10 in Beijing.

For media couture coverage. Despite their huge successes on the court, May-Treanor and Walsh Jennings just can’t seem to win when it comes to what they’re wearing. When the two declared their intentions to compete in bikinis (which, as U.S. teammate Jen Kessy insists, is what the women feel most comfortable in), they were called cheeky. Then, when the duo pulled on long-sleeved T-shirts to stay warm in the mid-60-degree London weather, they were criticized for not showing enough skin. To maker matters worse, photographers on the sidelines seem to have wandering eyes, as photos of the backsides of bikini-clad women volleyball players have been cluttering stock photo websites such as Getty Images. In a response to the degrading images—which often leave out the heads of the volleyball players—Metro.com suggestively cropped photos of male athletes to show what it would be like if all Olympic sports were captured in this objectifying way.

For the coverage of the women gymnasts. Here are some ways these awesome athletes’ accomplishments have been trivialized:

For Michelle Obama, delegate for the U.S., who has been spotted at various Olympic events in support of the American athletes. But we want to especially thumbs-up the love she’s been showing to the female Olympians: This past Saturday the First Lady cheered on Serena Williams in her opening match against Jelena Jankovic and, when she met wrestler Elena Pirozhkova, allowed the athlete to show off her strength by picking the First Lady up.

For Ye Shiwen’s gold medal finishes in the 200m and 400m individual medley. But …

For the immediate accusations that her accomplishments were the result of doping. After the 16-year-old swimmer beat Ryan Lochte’s time in her last 50-meter freestyle split during the 400m individual medley on Saturday, U.S. swimmers, coaches and commentators alike hinted that her success may not be built on sweat and blood alone. Yes, the Chinese had a history of doping in the 1990s, but Shiwen trains with coaches in Australia. Unless tests prove otherwise, she should be celebrated for her prowess. The Olympic authorities defend Shiwen here.

For Missy Franklin’s gold medal in the 100-meter backstroke Monday. Incredibly, she had less than 15 minutes  between the 200-meter freestyle semi-final and her gold medal swim.