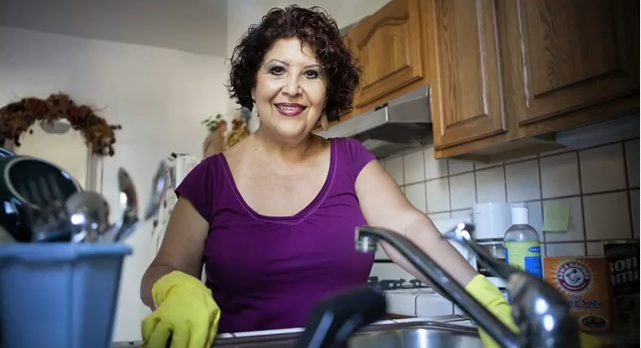 Though they care for our homes, children, elderly parents and disabled family members, domestic workers are often made invisible. Not only does their work go largely unnoticed by society, but more importantly they’re denied basic labor protection laws.

Currently, the National Labor Relations Act excludes domestic workers, including childcare providers, housekeepers and caregivers. These workers are predominately women—especially women of color, many of them immigrants. Without legal protections, they are not assured minimum wages, overtime pay, adequate working conditions or mandatory meal-and-rest breaks: rights that are granted to most other U.S. workers.

In California, where 93 percent of the state’s 200,000 domestic workers are women and 73 percent are foreign-born, it’s time to rally behind AB 889, the CA Domestic Workers Bill of Rights. The bill demands overtime pay, equal right to worker’s compensation, eight hours of uninterrupted rest in adequate conditions (particularly for those who are live-in employees) and the right of workers to use employers’ kitchens and make decisions about their own diets.

Modeled after a similar 2010 New York legislation, the CA Domestic Workers Bill of Rights passed the California State Assembly in 2011 and has just passed in the state Senate Wednesday. It’s now awaiting a signature from Gov. Jerry Brown.

As rallies for the passage of the bill continue in major cities throughout California, Emmy-nominated actor and women’s rights supporter Amy Poehler (Parks and Recreation, SNL) has stepped up to defend domestic workers’ rights in a new PSA for the National Domestic Workers Alliance (NDWA). Poehler, who describes herself in the video as an “actor, mother and working woman,” acknowledges that she wouldn’t be able to work and perform as much as she does if it weren’t for the hard-working women who support her in the home.

When workers are unable to collectively bargain for basic employment rights, they become more susceptible to exploitation of their services. For domestic workers—one of the most vulnerable labor groups in the U.S., according to the NDWA— low wages seem to be endemic to the industry. In Los Angeles County, 75 percent of child-care workers are paid less than minimum wage, while nearly 96 percent of all child care workers, housekeepers and caregivers have experienced overtime violations. Up in the San Francisco Bay Area, a 2007 survey found that 67 percent of domestic workers earn low wages or wages below the poverty line, with only 19 percent earning a wage sufficient enough to support a family of four. Many more than that 19 percent, however, are breadwinners: The same survey found that more than half provide the primary income for their households.

Domestic work is strenuous, requiring more time and physical effort than most 9-to-5 positions. Like everyone else, these hard workers deserve basic employment rights—and should be able to collectively bargain to avoid being overworked and underpaid.

To paraphrase Amy Poehler, it’s time to acknowledge and respect the women who work behind closed doors.

The Prosecutors Pledging Not to Enforce Abortion Bans: ‘Courageous Leadership the Moment Demands’
‘Uncultured’: The Intergenerational Trauma of Girls Growing up in Cults
Women Saving Democracy: A Secretaries of State Explainer