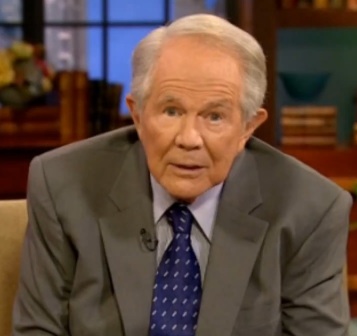 Pat Robertson has never been a friend of feminists, but he’s just proved that he’s the absolute last person you should go to for marriage advice—unless, of course, you’re looking for an excuse to beat your wife.

The televangelist, most notable for denouncing gays and lesbians, linking the destruction of Hurricane Katrina to the legalization of abortion and falsely predicating terror attacks, tsunamis and Judgment Day, made a succession of eyebrow-raising comments Monday on his show The 700 Club. When asked by a viewer how to tame his wife who no longer has “respect for me as the head of the house,” Robertson responded:

Well, you could become a Muslim and you could beat her. … I think this man’s got to stand up to her, and he can’t let her get away with this stuff. I don’t think we condone wife-beating these days, but something’s gotta be done to make her …

Robertson was then interrupted by co-host Terry Meeuwsen, reminding him that, no, nothing “physically” should be done to the wife. That didn’t stop Robertson from continuing to spew misogynistic drivel, calling the wife a “rebellious child” who probably had temper tantrums as a child, wanted to “slap her father” and never learned how to “submit to any authority.” (Keep in mind, Robertson has never met the woman or her family.)

So what is a man to do without divorcing the woman (and thus going against Scripture)? “Move to Saudi Arabia,” Robertson said, looking straight into the camera.

Robertson did not mention the downside of moving to Saudi Arabia: It’s one of the world’s most oppressive countries for women. But to Robertson, who preaches female submission, having a country where women must remain subordinate to men in all cases (travel, education, marriage, reproductive health and so on) must seem like paradise.

Screenshot of Pat Robertson from The 700 Club.

Don’t Draft Our Daughters—or Our Sons
Safe Haven Laws Were Never Supposed to Be an Alternative to Abortion
Our Abortion Stories: ‘He Said if I Got Pregnant, He’d Marry Me. I Got Pregnant. He Left.’