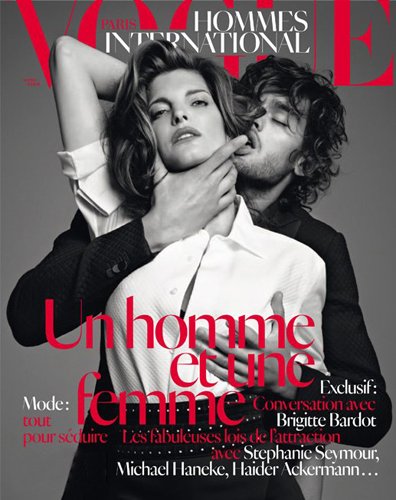 Or at least it was in Vogue in their latest Hommes Internationale issue.

The cover, which depicts model Stephanie Seymour being choked from behind by fellow model Marlon Teixeira, is causing a considerable stir. The image was taken by provocative-for-the-sake-of-being-provocative photographer Terry Richardson, and has inspired the ire of domestic violence and women’s rights organizations. The leaders of five of these groups, Sanctuary for Families, Safe Horizon, NOW-NYC, Equality Now and New York City Alliance Against Sexual Assault  penned a letter to Condé Nast chairman Si Newhouse, which included the following excerpt:

As a matter of corporate responsibility, thought leaders like Vogue should not normalize violence against women by using violent images to sell magazines.

Citing the alarming statistic that 43 percent of women who were killed by their partners experienced a previous episode of strangulation, the letter ends by urging Condé Nast “to be a leader in fostering respect and safety for women as well as beauty.”

This type of photography is meant to push the envelope, but such a distasteful example makes light of the three million women in the U.S. who are physically abused by their husbands or boyfriends each year. The photograph is edgy to the point of insensitivity, sending the message that choking women is passionate instead of violent.

The photographer is no stranger to controversy. Earlier this year, he took photos of ever-spiraling Lindsay Lohan holding a gun to her head, and two years ago female models he worked with accused him of sexual harassment. Then, just a few months ago, he posted a slow-motion, boob-jiggling video of swimsuit model Kate Upton that was temporarily banned from YouTube and then became one of the most circulated GIFs on the Internet.

Women have long been debased and humiliated in fashion for the glory of “pushing boundaries.” This particular photo is drawing special attention because the photographer has already forged a certain degree of notoriety for being behind one of the more prominent camera lenses of the male gaze. And it’s in the influential Vogue.

Detractors may think the offended organizations are having knee-jerk reactions to a photo that is just meant to be seductive. But then they should probably ask themselves why they find the mixture of violence and sex so alluring.

By associating abuse with eroticism, Vogue propagates the disturbing idea that women enjoy being subjugated. Strangling is a frequent habit of batterers, and this shouldn’t be used as a tawdry gimmick for selling magazines. Violence is never fashionable.

Sanctuary for Families is running an online petition to have the current issue of Vogue Hommes Internationale pulled from the newsstands. You can sign the petition here or write a letter to Delphine Droyant (droyant@condenast.fr) or Olivier LaLanne (olalanne@condenast.fr) at Condé Nast International.