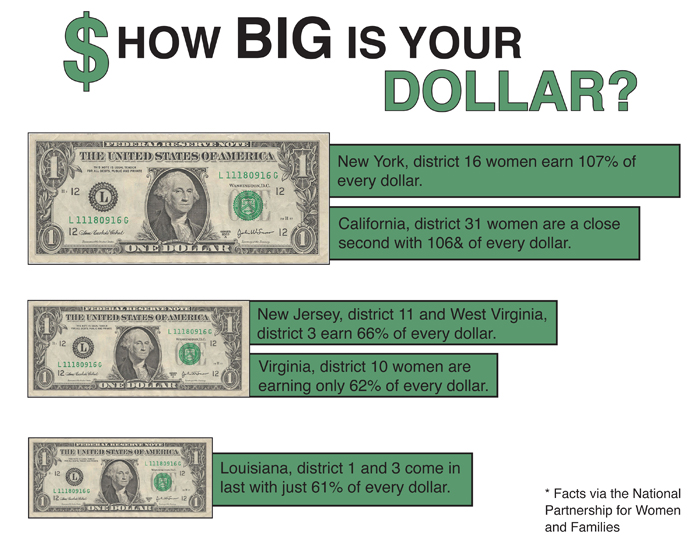 Ever wondered how women in your area fare against the everlasting gender wage gap?  Now, thanks to a recent release from the National Partnership for Women and Families (NPWF), you can see how women are doing right in your congressional district.

This analysis of wage gap data, broken down by congressional district for the first time, confirms what we already know, and in a big way: The median yearly income for women is less than the median yearly income for men in 423 of the 435 districts. This means that women living in 97 percent of the United State’s congressional districts are losing crucial income every year as a result of a longstanding and oppressive gender wage gap.

Nationally, a woman who works full time earns just 77 cents per every dollar earned by a full-time working man. Women of color earn even less: African Americans and Latinas earn just 64 and 55 cents respectively for every dollar a non-Hispanic white man earns. The states where women fare the worst are Louisiana, Virginia, New Jersey and West Virginia. The two worst districts for women’s pay equity are both in southern Louisiana, where women earn just 61 percent of every dollar men earn.

Though the results of this analysis are largely dismal, the study did find that women’s earnings are equal to or greater than men’s earnings in 12 districts, most notably in New York’s congressional district 16 located in the Bronx, where women earn 107 percent of every dollar men earn. On the surface, these 12 districts (or three percent of the total) may seem like a (minuscule) step in the right direction. However, it is important to consider all factors at play, such as the median income levels in these areas, before counting them as triumphs.

Similarly, in California, the 2011 median family income for congressional district 31–where women earn 106 percent of every dollar men earn–is $35,260, while the state median family income is $65,476. The same trend exists in Arizona, Illinois, Georgia, and Texas–the four remaining states that contain districts where women out-earn men.

“People who celebrate areas where women appear to be doing better may be missing the point,” says Sarah Crawford, director of Workplace Fairness for the NPWF. Women perform as well as or outperform men in these districts “because pay levels are already low,” she says, “not because [women] are at the top of the pay scale.”

As Crawford suggests, it is necessary to look at the overall income levels in these districts before celebrating them as victories, since women in these areas still may not earn as much as do women in districts where they are out-earned by men.

A second fact of note in these 12 districts where women outperform men concerns racial composition. In each one,  a majority of the community members are African American or Hispanic. For example, as of 2011, Illinois’ district 4,  which covers parts of Chicago and where women earn 101 percent of every dollar men earn, is 74 percent Hispanic. District 4 in Georgia, which covers portions of Atlanta, is more than 50 percent African American. What seems like a positive development in gender equality may actually be masking issues of racial inequality: Women may be outperforming men on their paychecks because men in these districts are struggling particularly hard financially. The NPWF plans to study the impact of the state-by-state wage gap on women of color when the U.S. Census Bureau releases that data in October. 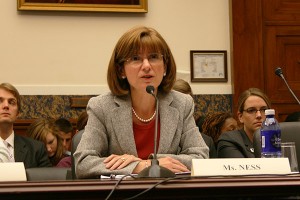 This research, despite some troubling findings beyond gender that deserve action, presents an opportunity to view economic disparities on a specific and local level. Women can easily see how they compare to men in their districts, and how they fare next to women in other districts across the country. Data so specifically broken down is difficult for lawmakers to ignore. Debra Ness (right), President of the National Partnership of Women and Families, writes:

These new data should be a clear and resounding wake-up call for all lawmakers who have power to pass legislation that would help close the gap and promote economic security for the women and families in their districts.

Ness is especially supportive on the Paycheck Fairness Act, which would close loopholes in the Equal Pay Act of 1963. The act would require employers to prove that pay disparities among employees exist for legitimate and job-related reasons; recognize employers with good pay practices; and provide assistance to small businesses that struggle to adopt them. Additionally, the act would create a negotiation skills training program for women and girls. Each of these aspects would strengthen workplace protections and help narrow the wage gap. But despite strong public support, the act failed its Senate vote in June, prompting Sen. Barbara Mikulski (D-Md.) to “[call] on women everywhere to keep fighting until the bill becomes a law.” Says Ness:

It’s time for all members of Congress to take a hard look at an issue that is hurting women and families in 97 percent of districts across the country. It’s time for them all to commit to promoting fair wages by passing the Paycheck Fairness Act.

Hopefully the release of this analysis will add fuel to the struggle for the Paycheck Fairness Act. It’s time that women are paid as men in 100 percent of the nation’s congressional districts rather than just 3 percent.

To see what the wage gap is in your state and congressional district, go to www.NationalPartnership.org/Gap.