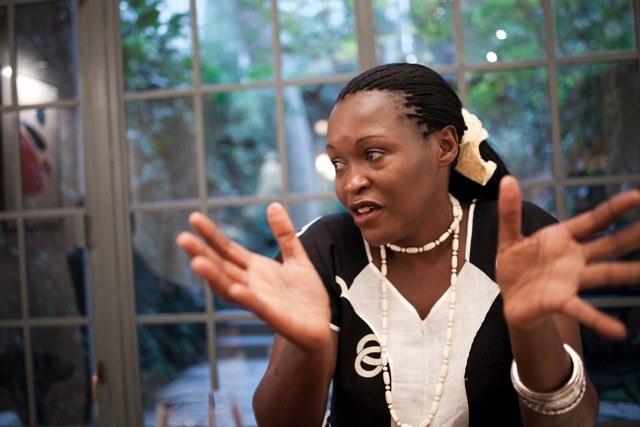 During Wangari Maathai’s Green Belt Movement in Kenya, a young Inviolata Mmbwavi stood by as the boys planted trees. Girls didn’t plant trees! Her mother thought, as did most Kenyan mothers at the time, that her daughter should be cooking. “You should be in the kitchen, you should be cleaning and scrubbing pots,” Mmbwavi remembers hearing, laughing at the thought of it now, more than 20 years later.

“But my brothers were playing and planting trees, and I wanted to play too,” she says. “My father told me, you go pick a tree and plant!” So she did. And, “that tree grew,” she tells me–just like her activism grew throughout her childhood and continues to grow to this day.

Inviolata Mmbwavi carries a tattered copy of the Kenyan constitution with her. “It is my weapon,” she tells me. “When someone says something that isn’t right under the law, I pull open my copy!”

The constitution is fragile and new. Written in 2010, it has yet to be fully implemented in Kenya. Based in part on the U.S. constitution, it provides revolutionary rights to women and other marginalized persons. But in practice, the constitution has gained little practical traction.  Mmbwavi is standing for Parliament in order to help change that–especially to help implement Article 27, which ensures the rights of all persons under the law, regardless of gender, race, religion or HIV status.

The third of 10 children, Mmbwavi found out she was HIV positive when she was just 19.

She ran away as the result of stigmatization by her family and the vicious gossip of her community.  People with HIV were ostracized from the community, seen as dirty, associated with deviant behaviors and left to die. Although such ostracism also happened in the U.S., the extent to which persons with HIV were treated in sub-Saharan Africa was a special kind of vicious.

But, Mmbwavi’s story is different. She turned her disease into an asset, using it as a sword. At age 25 she was asked to speak in front of Kenyan Parliament and share her story, “coming out” as HIV positive. Her act was groundbreaking. It began to turn the tide against HIV stigma in Kenya.

After that, her activism exploded. As a feminist, she speaks repeatedly about the inborn power of the Kenyan woman. She believes all answers lie in the power of one woman educating another.

She has been the director of the Grassroots Empowerment Trust, sending young girls to school–in addition to make sure all of her siblings received their education. She speaks out internationally against the still-prevalent forced sterilization of women with HIV.  She also speaks out about female genital mutilation, which continues to occur in Kenya.

Mmbwavi is wrapping up a brief tour of New York and Washington, D.C., to raise funds for and awareness of her campaign (fundraising is unheard of in Kenya, and there is no monetary support provided by the political parties as you would see with, say, the DNC in the Untied States). Even more importantly, she’s speaking out about the importance of the 2013 elections in Kenya and making sure women there register to vote. (The last Kenya elections, in 2007, had a disputed outcome, leading to the slaughter of more than 1,200 people and the displacement of hundreds of thousands. Mmbwavi also ran for office that year but is glad she didn’t win: the winner of that seat was murdered two weeks after the voting.)

She lives her belief in the power of women coming together.  I experienced it first hand recently when I was in Uganda and spent a nerve-wracking 24 hours. I had asked some cutting questions to people within the government, and several Ugandan friends cautioned me to be careful, as “things” still happen in Uganda. A British journalist had been deported; the week before my arrival, another journalist vanished.

I reached out immediately to Mmbwavi in neighboring Kenya–who I had met at the International AIDS Conference in Washington, D.C. this year—asking if I could come to Kenya if I needed to lay low for a couple days. She answered immediately and unequivocally “yes.”

During her trip to New York this week, as we met again, I asked her why she offered up her home to a woman she had met only once. She told me because that is “what you do, of course.” We help each other. One woman to another.

Andy Kopsa is a freelance writer based in New York City. She has written for The American Independent, RH Reality Check and AlterNet. She is a native Iowan and former Iowa newspaper editor. She blogs at Off The Record and you can find her on Twitter @andykopsa